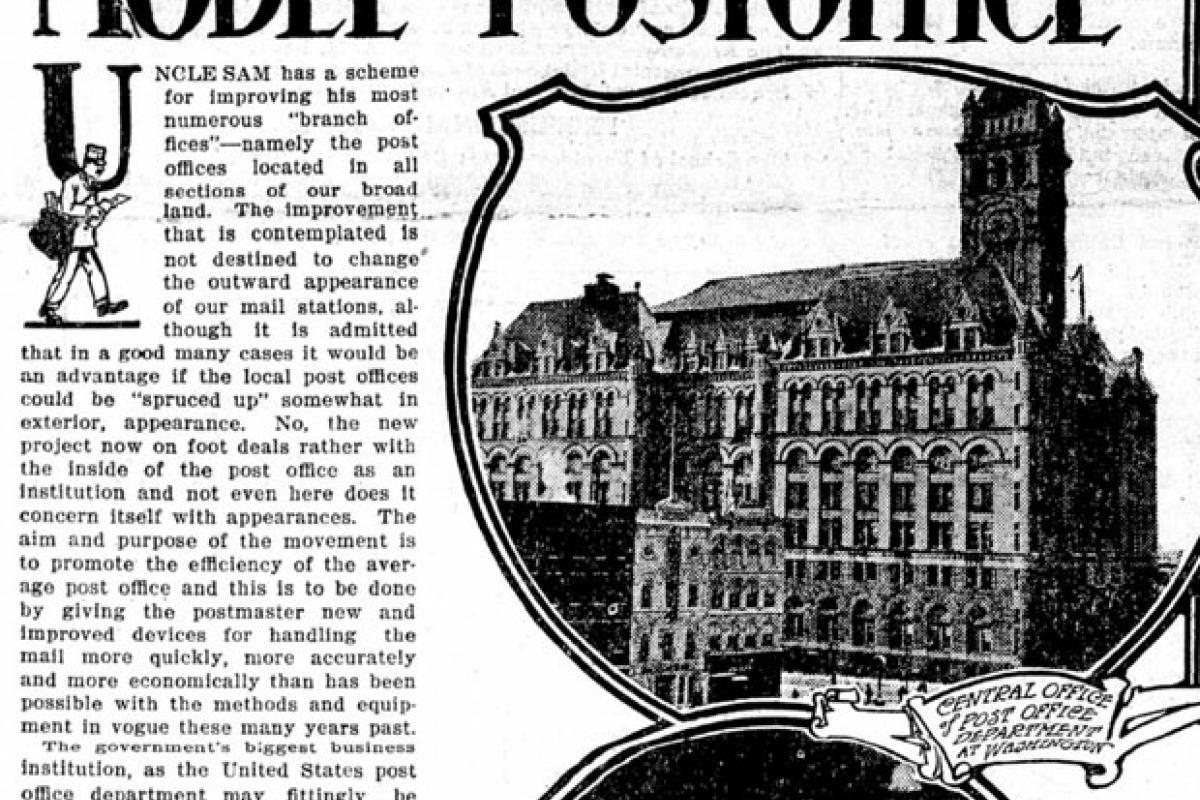 While no longer a functioning post office, the Old Post Office Building attracts thousands of visitors every year wishing to take one of the National Parks Service’s free tours of the iconic tower or snap a picture of the grand architecture.  Thanks to Chronicling America -- the site jointly sponsored by the National Endowment for the Humanities and the Library of Congress -- we can now piece together the building’s early history, when the “Old” Post Office was considered “new” and for a brief period served as a “model” for post offices across the nation.

Research in Chronicling America reveals that plans for constructing the new post office were set in motion by Congress on June 25, 1890, with the passage of an act calling for “a commodious and substantial building with fire-proof vaults, heating and ventilating apparatus, elevators and approaches, for use as a United States post office…”  By August, the cost limit had already been raised from $800,000 to $1.9 million.  Four years later, the brickwork was being laid for the “mammoth,” “immense” nine-story building, and two years later, curiosity was raised over the details of what would be at the time one of the country’s largest clocks, perched at a “dizzying” height.

Construction of the building was extremely dangerous.  One expert steeple climber reported on conditions that construction workers were subjected to while working hundreds of feet in the air:  “The men on the post office have to possess agility as well as strength.  They work all day on four-inch girders, five feet apart.  Standing on these insecure perches the workmen are compelled to handle great iron beams and girders weighing from hundreds of pounds to several tons, with only the sky above them and the concreted basement, nearly 200 feet below.” (The morning times. August 10, 1895)

The post office was completed in 1899 and became the first government building to have its own power plant.  From the newspaper reports, we can glean tantalizing clues about the postal service’s operations at the turn of the century.  For example, an office on the second floor intercepted letters addressed to the deceased.  An estimated $100 a day in cash and much more in money orders and bonds was reportedly confiscated by the Dead Letter Office, which made every effort to return money to the sender, with the remaining balance going to the U.S. Treasury.  The department acquired so many volumes of books and magazines in the process, in fact, that it opened a functioning library!

The most infamous moment for the “new post office” occurred on September 30, 1899, when the former Postmaster of Washington and Superintendent of the Post Office Department, James P. Willett, accidentally fell to his death from a fourth-story elevator shaft.

In spite of its grandiosity, the post office’s architecture and presence in the city garnered mixed reactions.  Already by 1911, Congress set its sight on building a new “magnificent” post office for the District of Columbia’s mail depot that would adjoin Union Station and “have the most modern equipment and mail handling devices known.” After only a couple of decades, the original 1899 post office was dubbed “old” and fell in disrepair; the Postmaster General moved to a new facility on 12th Street in 1934.

In the 1970s, public interest swelled to restore the building, and today visitors from around the world visit the Old Post Office, often to partake in a spectacular 360-degree view from the third highest point in the city.  Since 1983, the tower has also housed the Congress Bells, a gift from Great Britain commemorating our nation’s bicentennial and used to mark state events such as national holidays and the opening and closing of Congress.

Here are just a few of the articles that you will find:

The construction of the building:

The Sunday herald and weekly national intelligencer, May 24, 1891, Page 9

Moving into the building

"New Postoffice Building is Declared to be Unfinished"

Use of the building:

Opinions about the building

"A Monument of Inefficiency"