1928 map of Portland Maine and Some Places Thereabout.

Courtesy of the Osher Map Library at the University of Southern Maine.

Opening the pages of the Historical Atlas of Maine, published in 2015 by the University of Maine Press, with support from the National Endowment for the Humanities, one can’t but marvel at the state’s rich history – at once integral to the growth of the United States as a nation, at the same time uniquely local, a rugged and remote land that evokes a powerful sense of place and that has supported diverse populations throughout its history.  Editor Stephen Hornsby (Director, Canadian-American Center, and Professor of Geography and Canadian Studies, University of Maine), reflecting on the impact of the award, noted that the project could not have been undertaken without NEH support:  “The grant allowed us to carry out much of the work and also helped leverage further funding to complete the project.”

The 208-page atlas features 76 two-page plates with a rich array of 367 original maps, 112 original charts and 248 other images — historical maps, paintings and photos — in addition to its text. The result is a unique interpretation of Maine, a rich visual record of the state’s history, and a major achievement in humanities research. 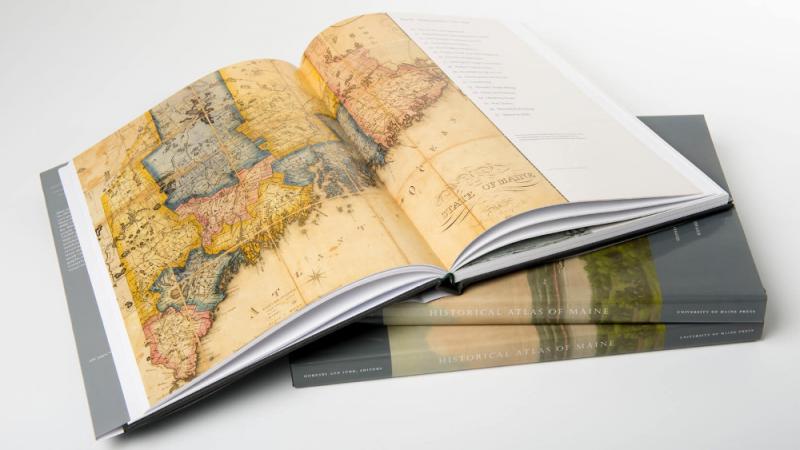 The Historical Atlas of Maine 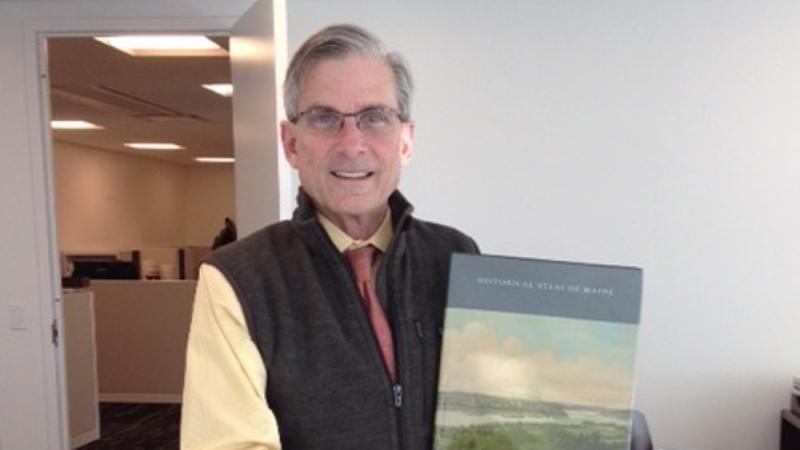 Illustrated with colorful custom-drawn maps, historic maps and photographs, artwork, and graphs and charts depicting shifting demographics, agriculture, trade and commerce, and changes in manufacturing over time, the Historical Atlas of Maine is as beautiful to look at as it is fascinating to read.  Interested in learning more about the lobster industry, sardine canneries, or maritime trade? Maybe you’d like to know more about French-Canadian migration or Native American treaties and land rights?  Or are you drawn to the Romantic image of Maine as a natural refuge? Then you’ll be interested in following the route that Henry David Thoreau took through the Maine wilderness between 1846 and 1857 that resulted in his literary masterpiece, The Maine Woods.  And you’ll love the pages devoted to “Mountain Views, Coastal Scenes,” where you can see how the landscape paintings of Thomas Cole and Winslow Homer touched off a boom in vacation travel for East Coast elite.  These were the attitudes that laid the foundation for Maine’s tourist industry and environmental movement of the late 19th and 20th centuries.  Or maybe you just like historic maps – and there are plenty of them!

The Historical Atlas of Maine was conceived in 1997 by Burton Hatlen, beloved University of Maine Professor of English.  Dr. Hatlen thought that a historical atlas would be a gift to the people of Maine, showcasing the mission of the university as a land-grant institution and enhancing humanities scholarship across the state.  The project received seed money from the Maine Legislature in 1999, and thanks to an NEH award made in 2003 through the Division of Preservation and Access, the main work of research, compilation, and illustration could begin in earnest. Additional funding was provided by the National Science Foundation, the University of Maine, and the Bernard Osher Foundation. 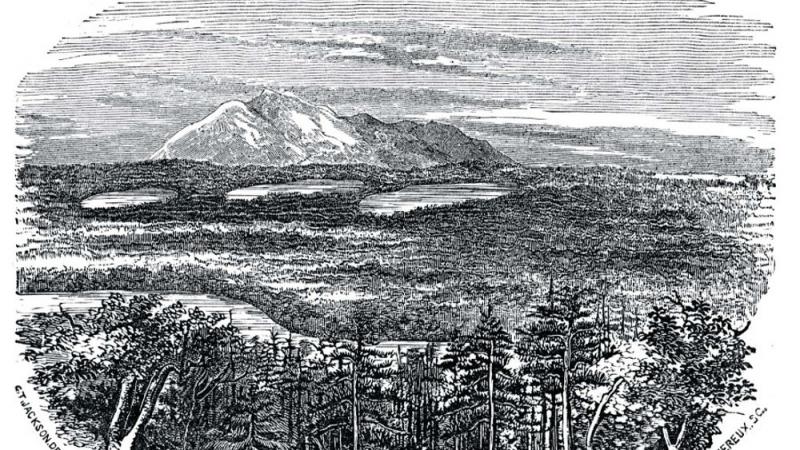 This engraving from John S. Springer, Forest Life and Forest Trees (New York, Harper and Brothers, 1851), the first major study of the lumber industry in Maine, shows Mount Katahdin and the extensive pine forests of the upper Penobscot watershed. 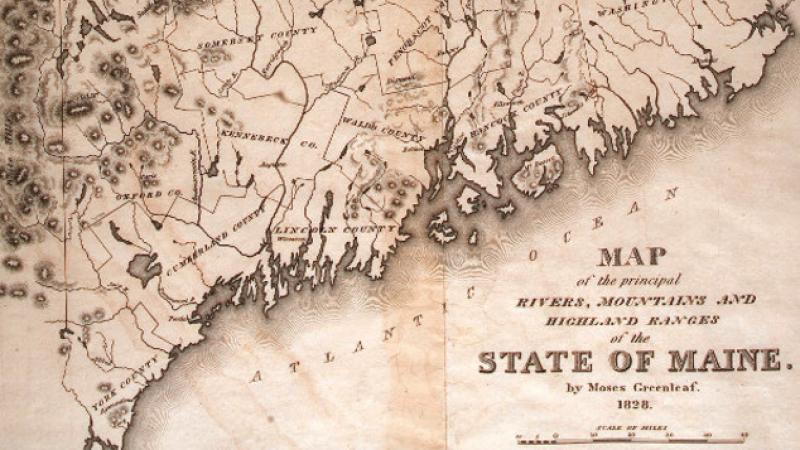 In 1828, Moses Greenleaf compiled a map of Maine based on his own explorations and conversations. His map filled in some of the blank spaces in the interior and provided a reasonably accurate guide for other expeditions. The blue boundary line represents the United States’ claim to northern Maine. The yellow line depicts the boundary claimed by Great Britain from 1821 to 1842.

Editors Stephen Hornsby and Richard Judd (Colonel James C. McBride Professor of History, University of Maine) worked with tribal historians and faculty in history, natural sciences, and geography from across the University of Maine system to assemble the documentation that informs the atlas.  Additional contributions were made by scholars at other universities in the United States and Canada.  And students, both undergraduate and graduate, also contributed to the research and preparation of many of the colorful and informative plates.

Right from the beginning, the editors wanted to produce a resource that would be physically attractive and accessible. Each plate appears in a bold, graphical style, with maps, drawings, photographs, and paintings, making the atlas both easy to read and stunning to look at. Its look owes much to the cartographic design of Michael Hermann, founder of Purple Lizard Maps and a former cartographer at the Canadian-American Center, University of Maine, who was hired to create custom maps that illustrate Maine’s history. 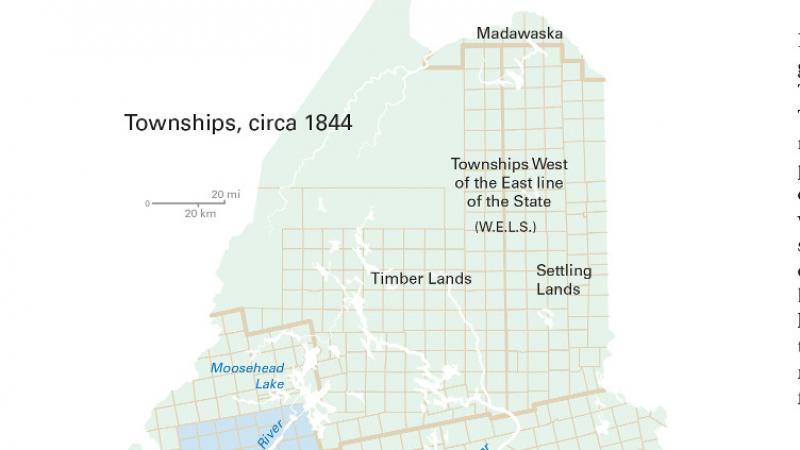 During the 17th and 18th centuries, the colonial government granted tracts of land called townships to groups of settlers or proprietors, authorities who then surveyed the land and assigned it to individual settlers. 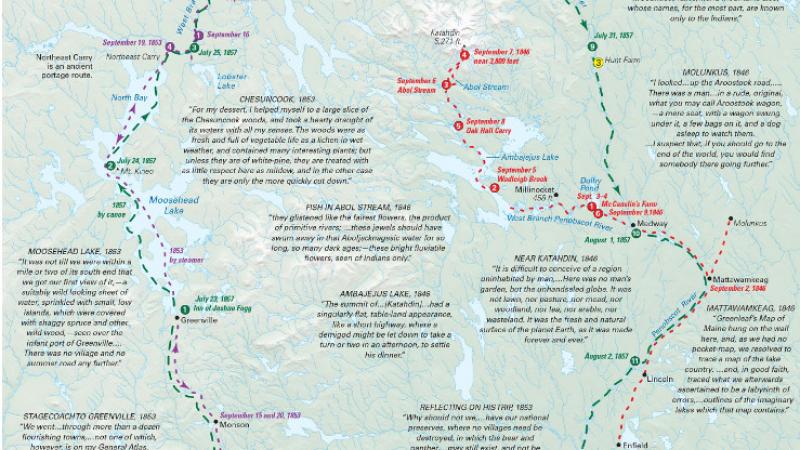 Based on more than a decade of extensive research, the Historical Atlas of Maine presents in cartographic form the historical geography of the state from the end of the last ice age to the year 2000. Three main themes are woven throughout the atlas: Native peoples, from the pre-contact period through colonial and statehood periods up to the present; Euro-American exploration and exploitation of Maine’s natural resources; and the rise of environmental awareness and the tourism industry.  The editors note that the future development of Maine will depend on finding the right balance among Native American interests, the needs of industry, and the demands for environmental protection.

The Historical Atlas of Maine has already garnered four publication awards – the most significant being the 2016 Globe Book Award from the Association of American Geographers (AAG), the largest professional organization of geographers in the world!

The Globe Book Award is an annual prize for a book that “conveys most powerfully the nature and importance of geography to the non-academic world,” according to the AAG’s Web site.  Co-Editor Stephen Hornsby says “The Globe Award for the Historical Atlas of Maine is recognition of its national — indeed, international — distinction.” 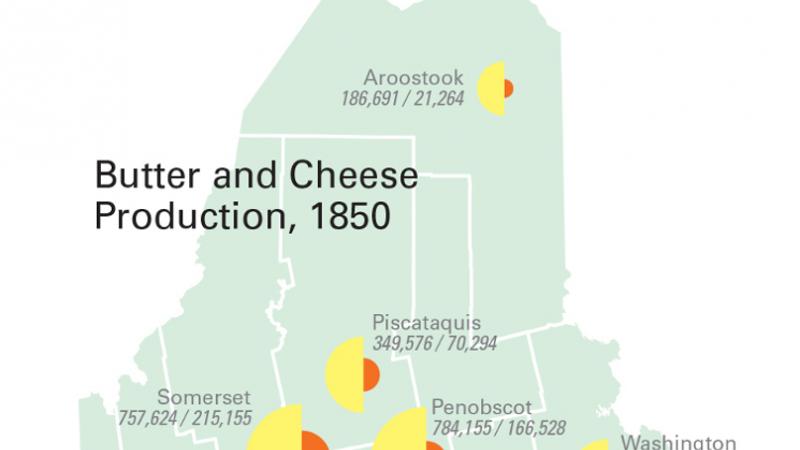 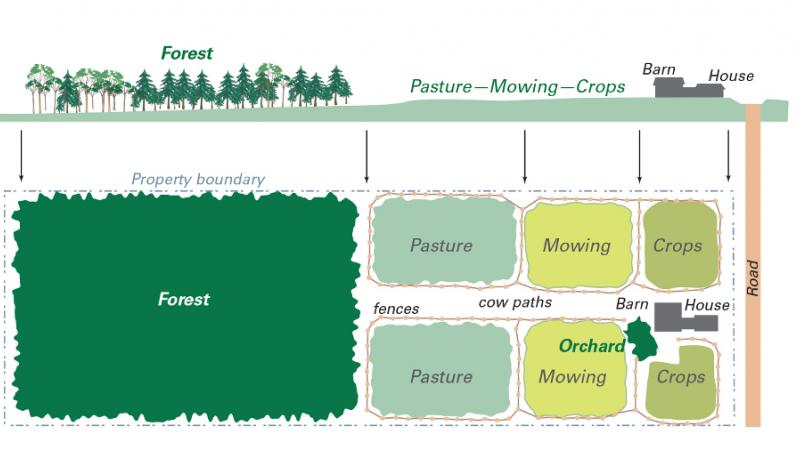 Land Use on a Maine Farm

Other awards include: the “Book/Atlas” category and “Best of Show” by the Cartography and Geographical Information Society and the “Excellence in Publishing Award” from the Maine Writers and Publishers Alliance.

If you are interested in purchasing this stunning publication, the Historical Atlas of Maine is available through the University of Maine Press, and independent and online bookstores.

The principal fishing areas for cod were the shallow banks off Nova Scotia, Newfoundland and Labrador. The historic “Yankee Gale” of Oct. 3-5, 1851 drove thirty mackerel vessels onto shore on Prince Edward Island, where 77 crew members lost their lives.

The Division of Preservation and Access provided support to the University of Maine, Orono, through a Preservation/Access project (PA-50163-03) in 2003.