Going to the Source: A Q&A with Professor Andie Tucher 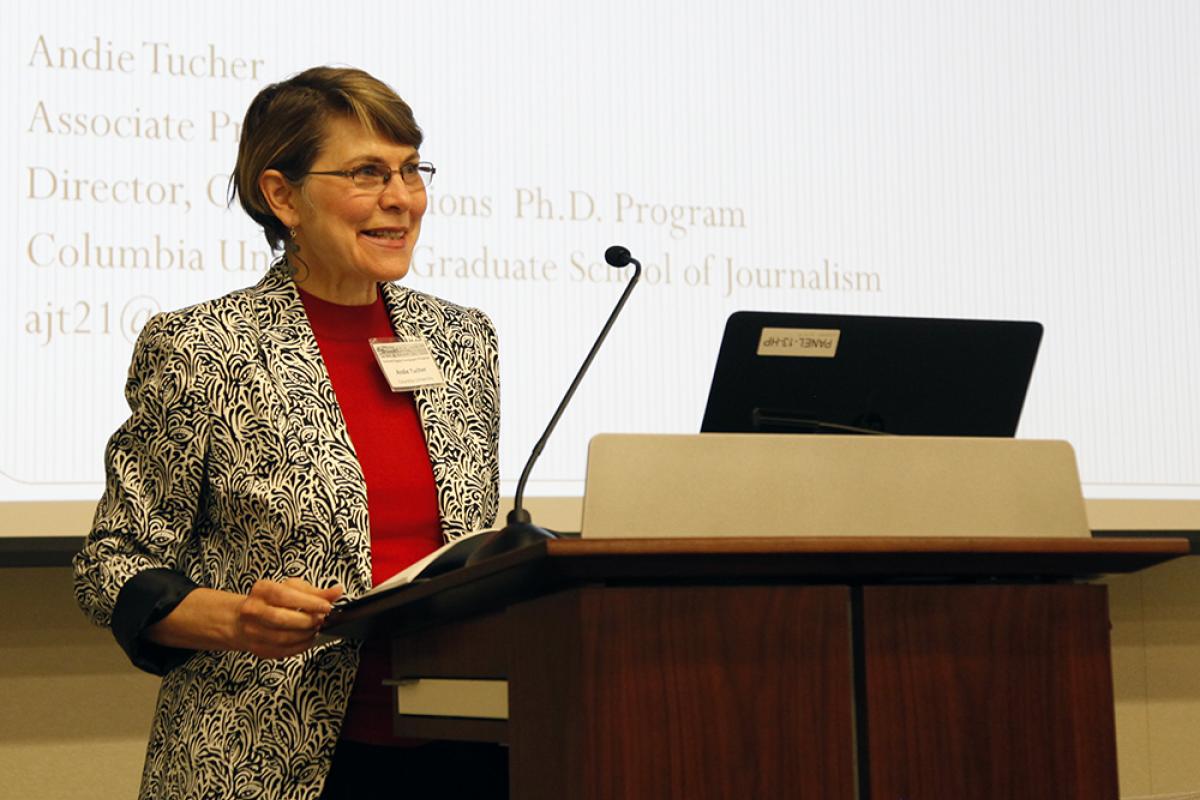 How important is the “truth” in newspaper reporting?  How do attitudes toward objectivity in today’s journalism differ from those of the past?  And why teach students the history of journalism?  These are some of the questions we had for Professor Andie Tucher, a Columbia University historian and journalist and Director of the Columbia Journalism School’s Communications PhD program, after she addressed the annual meeting of awardees in the National Digital Newspaper Program  in September 2014 in Washington, DC.  The NDNP is a partnership between NEH and the Library of Congress, aimed at creating a national digital resource of historically significant newspapers published between 1836 and 1922 from all the states and U.S. territories.

Professor Tucher writes on the history of reporting, photojournalism, and the conventions of truth-telling, and she spoke about some of the fascinating uses she has made of Chronicling America in her research.  Chronicling America is a national, searchable database of newspapers published in the United States and Territories between 1836 and 1922, produced through a partnership between NEH and the Library of Congress.  Launched in 2005, the website currently offers anyone with an internet connection access to over 8 million pages of digitized historic newspapers.  Professor Tucher used Chronicling America when researching her new book, Happily Sometimes After: Discovering Stories from Twelve Generations of an American Family, which will be published by the University of Massachusetts Press in November 2014.  We asked her a few questions about her personal interest in journalism, her research in historic newspapers, and the place of truth and objectivity in stories and accounts of the past.

NEH:  How did you get interested in journalism and communications?

​Andie Tucher:  Like many kids I started a handwritten newspaper ​when I was about eight or nine, dragooning my four siblings as reporters and my poor parents as our only readers. Life on Pearl Place in our small New Jersey town was so interesting, we thought. There was the farmer no one ever saw until one day his horse escaped and turned up on our lawn, the local teenagers who allegedly played strip poker in the woods (a rumor we never confirmed), the ghost that haunted the movie theater (well, ditto).

But while as an adult I kept my interest in observing the world, I soon realized that a person too shy to ask probing questions of strangers was just not good reporter material. So instead I began to study how other people did journalism.

NEH:  Why do you think it is important for students in journalism to learn history?

​Andie Tucher:  I think it's important for everyone to learn history! Knowing something about where we've been, what we've faced, what mistakes we've made, what we got right is an absolutely crucial background for the decisions we as citizens make every day about public life and public affairs. But since journalists play such an important role in informing citizens about public issues, they have a special responsibility to understand the history and context.

NEH:  What first brought you to Chronicling America and using historic newspapers for your research?  How has newspaper digitization changed the way you do your work?

​Andie Tucher:  I'd been doing newspaper research for years before Chronicling America came along; if you're interested in studying the ways journalists have worked and how journalistic conventions have evolved, you have to go to the source. So the most obvious change: I can now take my head out of the microfilm reader, and just sitting on my couch with my coffee at hand I can do as much work comfortably in a day as I used to do miserably in a month!

But it's the ability to quickly and effectively search for words and terms that's really changed how I work. I recently became interested, for instance, in why the fundamental unit of journalistic work is called the "story"--a weird choice when you think about it, since in other contexts the same word means either a fiction or a lie. But by searching through Chronicling America I was able to trace how journalists used that word about their work and discover that for a while in the late nineteenth century, many of them actually did feel they had to explain that "in newspaper parlance," the word story had a special meaning. I could never have done that work with microfilm.

NEH:  What are some of the challenges you have found in using historic newspapers for research?

​Andie Tucher:  Newspapers are so familiar to us in our daily lives that we tend to assume they've always been the same, that a newspaper from 1865 was produced and read under the same kinds of conventions and assumptions in use today. But there were enormous differences between then and now.

It was perfectly normal and acceptable for a nineteenth-century newspaper to express strong political opinions, for instance; the idea of objectivity would have struck most readers then as pointless, even bizarre. Newspapers in that era routinely ran all sorts of material that was neither intended to be, nor taken as, true: short stories, poems, hoaxes, tall tales. And the interview was seen as a disgusting invasion of privacy that no decent person would submit to. If you don't know how conventions have changed, you won't be able to read that 1865 paper in anything like the spirit its original readers did.

NEH:  You use historic newspapers not only in your research, but also expose journalism students to them directly.  What are the benefits of this approach, particularly for students hoping for a hands-on career in journalism or communications?

Andie Tucher:  Partly I want to inspire students with the ​great and important and influential work of their predecessors: the courageous war correspondents, the tenacious investigative reporters, the inventive New Journalists. But I also want to warn them against the low points, and show them the times when the press didn't live up to its responsibilities to be accurate, to be fair, or to hold the powerful accountable to the public.

NEH:  Your new book explores the relationship between the “truth” in the historical narrative and the stories people tell about events.  What are some examples of how this truth diverges from the stories?  What do these stories reveal about the possibility of objectivity in telling history and the ways people frame their lives and experiences?

Andie Tucher:  It's always hard to explain disappointment. It can be especially hard in America, a nation founded on the premise that everyone ought to have the chance to find happiness. In my book Happily Sometimes After I track down stories told by and about some of my American ancestors, who first arrived here in 1619 and who found a little bit of happiness--a few of them were enormously rich, though it didn't last--and, it seems to me, a lot more disappointment.

But often, the stories they told made things more bearable. After a Virginia man, for instance, was killed during a mass assault by Native Americans, stories were told crediting the wife with rescuing her young sons in a way that was historically impossible but dramatically satisfying. And after a young man came home from the Civil War suffering from something that sounds like PTSD, relatives made him the hero of a story about refusing to tell marauding Yankees what they wanted to know--a story, it turned out, that they had "borrowed" from the family of Jesse James, who told it about a ne'er-do-well uncle of theirs. But while these stories do not provide accurate factual information about the mass assault or the Civil War that a historian could use, they offer a different kind of truth: they give us insights into how people coped with the disappointment and heartache of daily life.