The NEH celebrates the arrival of spring, a season of rebirth and abundance, by highlighting two projects in the Division of Preservation and Access that connect the human with the natural world and that bring to light humanities resources of unusual richness and beauty.

Both are the result of recent grants in the Humanities Collections and References Resources program. First, we will describe the efforts at the University of Kansas to catalog, conserve, and digitize materials related to the 19th-century bird illustrator John Gould. Next week, we will explore the work of the Chicago Botanic Garden to catalog and digitize its rare books on plants, encompassing five centuries of research in botany, horticulture, gardening, and landscape design.

The birds around me hopped and played,
Their thoughts I cannot measure:-
But the least motion which they made
It seemed a thrill of pleasure. 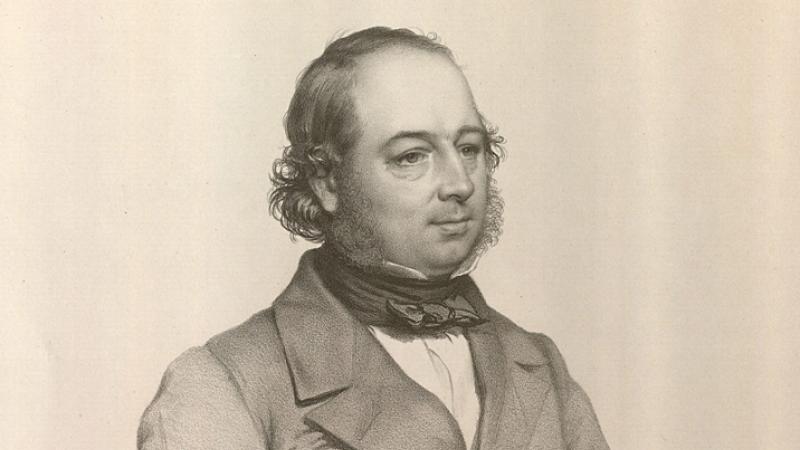 John Gould portrait (lithograph drawn by T. H. Maguire, 1849) inserted in Spencer Library’s copy of Gould’s A Monograph of the Ramphastidae,: or Family of Toucans(London, 1854). 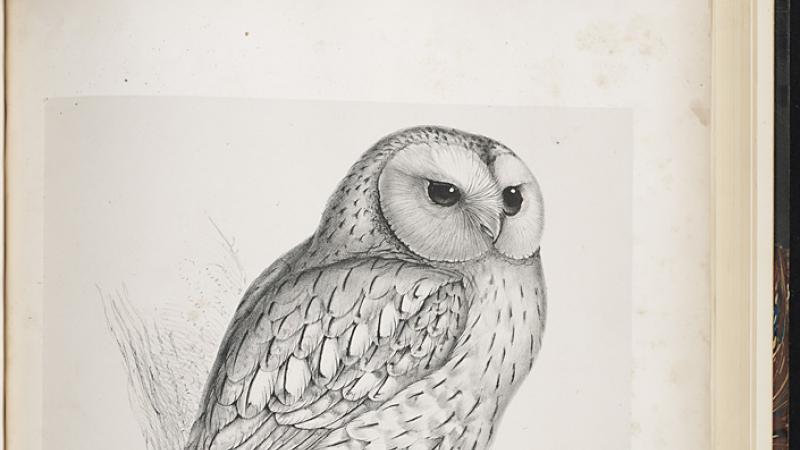 Uncolored proof of the tawny or brown owl (Syrnium aluco) drawn by Elizabeth Gould with crayon on lithographic stone for The Birds of Europe (London, 1837), vol. 1, plate 47.

Ornithologist, collector, illustrator, and publisher, John Gould (1804-1881) is often regarded as the British John James Audubon. In fact, Gould’s books about birds cover a wider geographical range than those of his American counterpart, depicting birds of Australia, New Guinea, Europe, North America, and Asia. The son of a Dorset gardener, Gould opened a taxidermy business and later became a curator at the Zoological Society of London. His work there with biological specimens from around the world sparked a lifelong interest in birds.

Gould lived at a time of burgeoning scientific and popular interest in the natural world. He collaborated with Charles Darwin in identifying bird specimens that Darwin had collected during his famous voyage to the Galapagos Islands on the H.M.S. Beagle. Gould himself traveled to Australia in 1838 and spent two years mainly in the field collecting and drawing birds, while his wife, Elizabeth, stayed with family and friends in Australia and painted the fauna and flora. The results were the seven-volume Birds of Australia (1840–1848) and his only book (three volumes) about mammals, Mammals of Australia (1845-1863), both pioneering works in which Gould identified hundreds of species new to science. Gould was a prolific author. Partnering with a team of illustrators that included his wife, Elizabeth, he published a total of 12 folio-size works on birds comprising 47 volumes and 3,100 lithographic hand-colored plates. 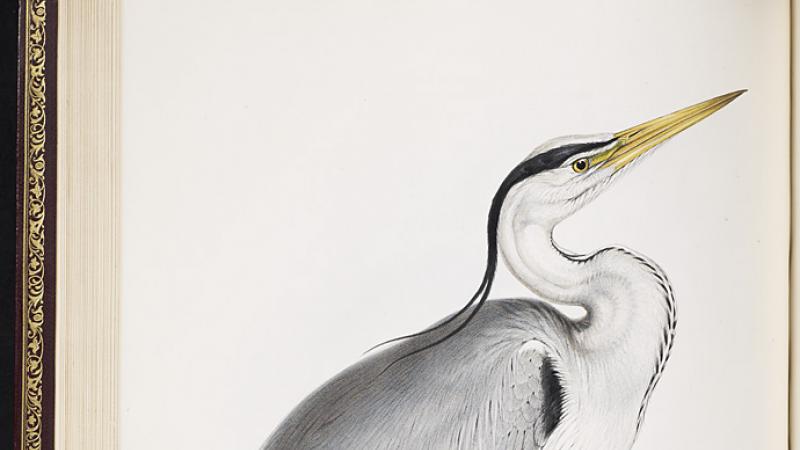 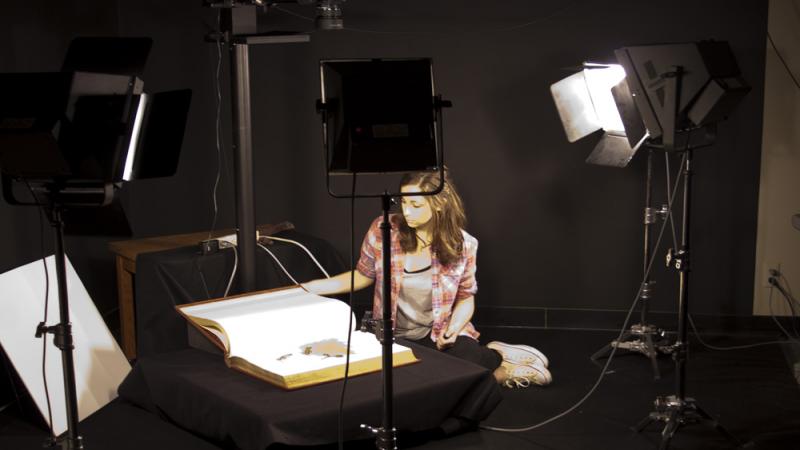 The Kenneth Spencer Research Library at the University of Kansas in Lawrence holds the world's largest collection of Gould's materials. They include 2,400 preliminary drawings, paintings, and tracings, as well as hundreds of proof prints showing about 1,500 species of birds. The library also contains the papers of Gordon Sauer (1921-2003), historian and biographer of Gould. Because these collections were unprocessed, they remained largely inaccessible to researchers. In 2011, the University of Kansas Libraries received a NEH grant to catalog and provide conservation treatment of the Gould materials and to photograph and create finding aids to facilitate online access to these collections. Many units throughout the University of Kansas Libraries have collaborated on metadata, preservation, imaging, and access. The conservators have completed treatment of all the preliminary drawings, and the imaging specialists have photographed over half of the volumes containing hand-colored lithographic plates of birds and mammals. The world-class ornithology faculty at the University of Kansas has also assisted in identifying some of the previously unidentified species depicted in the preliminary drawings. 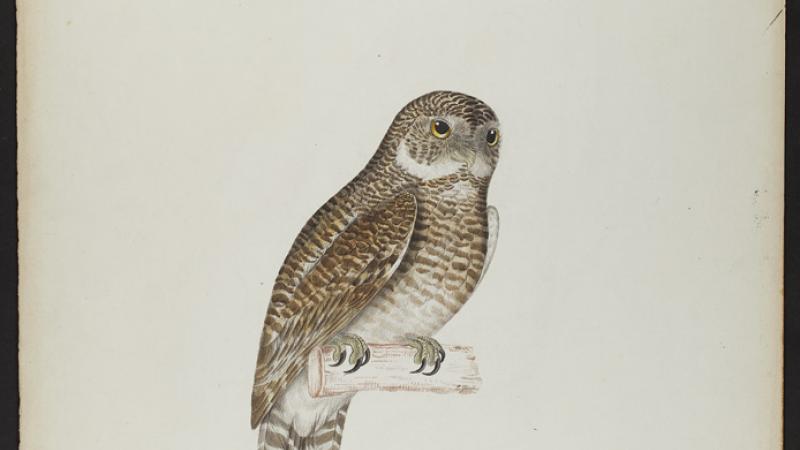 Detailed pencil and watercolor drawing by Elizabeth Gould, John Gould’s wife and first artist collaborator, of Noctua cuculoides for A Century of Birds from the Himalaya Mountains (London, 1831), plate 8. 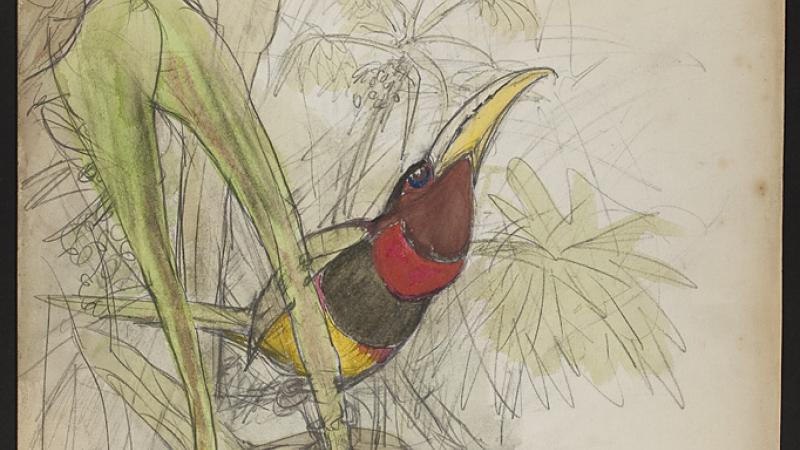 Rough sketch of two brown-mandibled Aracari (Pteroglossus mariae) drawn in pencil and watercolor by John Gould and one of his artists, H.C. Richter for A Monograph of the Ramphastidae,: or Family of Toucans (London, 1854), plate 30.

When the project is completed later this year, more than 6,000 illustrations of birds from the Gould Collection will be freely available via the library's Web site. Historians of science, specialists in scientific illustration and publishing, as well as other users—members of the bird-loving public, conservation advocates, and educators and their students—will be able to access high-quality digital images of Gould’s drawings, watercolors, lithographic stones and proofs, color trials, and associated published prints from the bird books. The illustrations will be searchable by species, geographic location, graphic formats, and name of the artist.

Support for this project was awarded through a Humanities Collections and Reference Resources grant from NEH’s Division of Preservation and Access: PW-50847-11 to the Department of Special Collections, Kenneth Spencer Research Library at The University of Kansas.