Kenneth Boydston and Gregory Heyworth make adjustments to the stand.

In August 2014, an interdisciplinary team of imaging scientists and scholars gathered at Yale University’s Beinecke Rare Book and Manuscript Library to undertake exciting work on a map that in all probability influenced Christopher Columbus’s conception of world geography.  Drawn by German cartographer, Henricus Martellus, who was working in Florence, Italy, in about 1491, the map shows the entire world as it was known at the time. 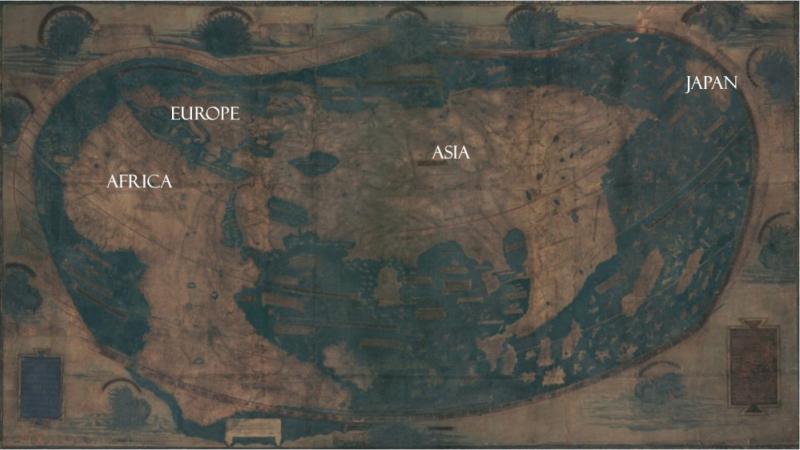 The world map made c. 1491 by Henricus Martellus at the Beinecke Rare Books and Manuscript Library, Yale University. 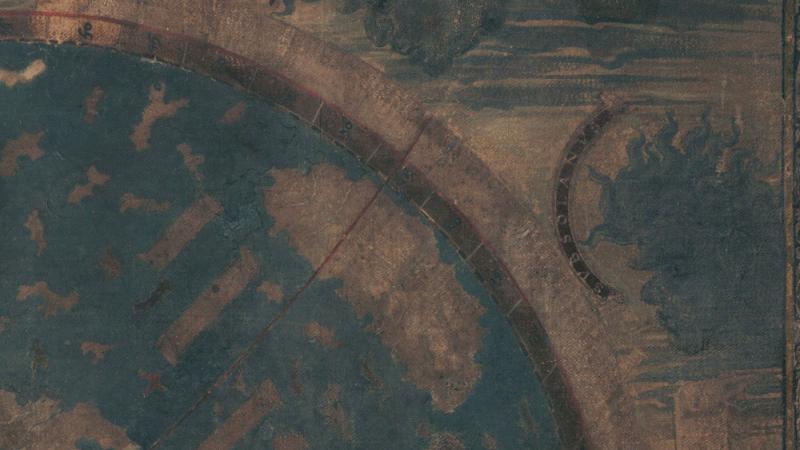 The eastern edge of the Martellus map, showing Japan.

You can see in the picture above the large mass of Africa to the left, Europe with its telltale Iberian and Italian peninsulas to the north, and the mass of Asia, the Indian subcontinent, and Pacific islands to the right.  At the farthest right is Japan, depicted for the first time with a north-south orientation.  Missing, of course, is the New World, which was still unknown to Europe when the map was made.  Around the margins are decorative elements with descriptions of lands and peoples, and cartouches, with Latin text, presumably identifying the contents of the map (though most of the text is obscured).

Acquired by the Beinecke Library in the early 1960s, the Martellus map (as it is now known) was regarded by scholar R.A. Skelton as the “missing link” of intellectual and cartographic traditions at the time of the discovery of the New World.  It is believed to demonstrate concepts -- such as the short distance between Europe and the eastern shore of Asia, which makes Spain be closer to China via a westward route than an eastward one -- that show a tight intellectual connection between the cartographer and Christopher Columbus.  It is also likely that the Martellus map served as the source for the 1507 world map by Martin Waldseemüller, now at the Library of Congress, the first map to depict and apply the name "America" to the New World (see image gallery). 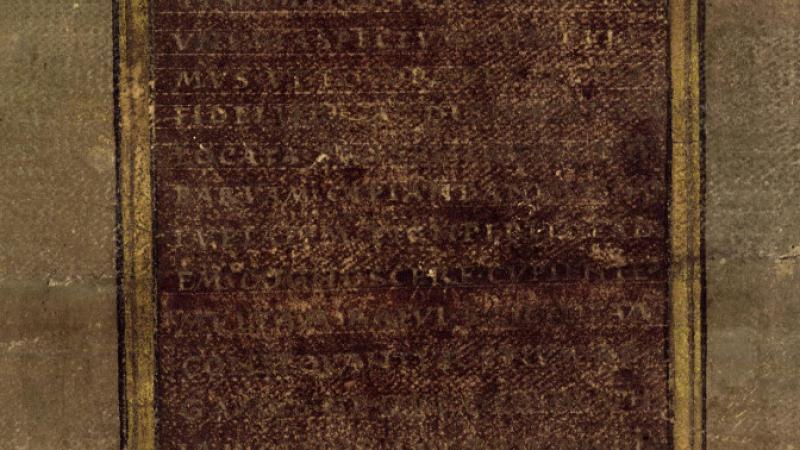 A cartouche in the lower right corner of the Martellus map, with essentially illegible text. 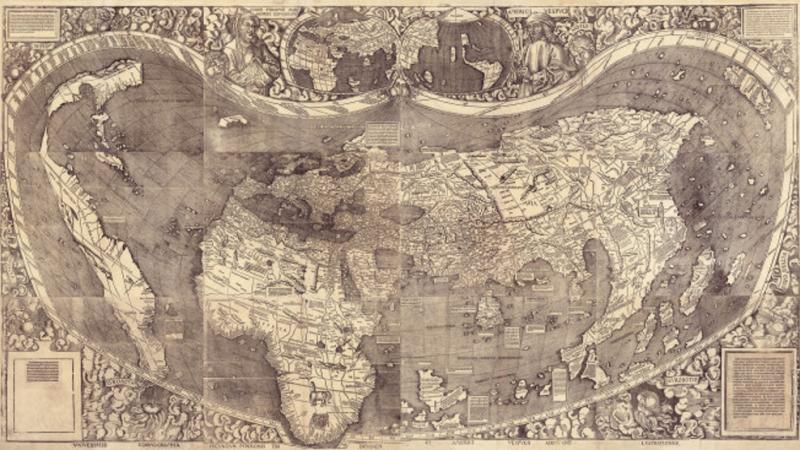 World map of Martin Waldseemuller,1507, influenced by Martellus’ map and the first document to name “America”

Courtesy of: Library of Congress, Geography and Map Division

The Martellus map is unusual for its size, measuring approximately 4 x 6.5 feet, and also for the amount of detail in the text and legends that identify land and water features both in the body of the map itself and across its margins.  While large and laden with rich historical text, preservation of the map has been less than optimal.  The Martellus map is hand-painted on paper, which has been glued to a canvas backing; many of the texts and legends are illegible due either to damage to the paper or fading of the paint.

With funding from NEH’s Division of Preservation and Access, an interdisciplinary team of humanities scholars, digital specialists, and librarians is about to open a new window on the Martellus map through the use of multi-spectral imaging.  The imaging will render the text legible for detailed analysis, which will shed light on understanding of world geography and cartography at the time, as well as help scholars address specific research questions, such as whether Martin Waldseemüller drew on the spatial relationships and the place names of the Martellus map for his own 1507 map. 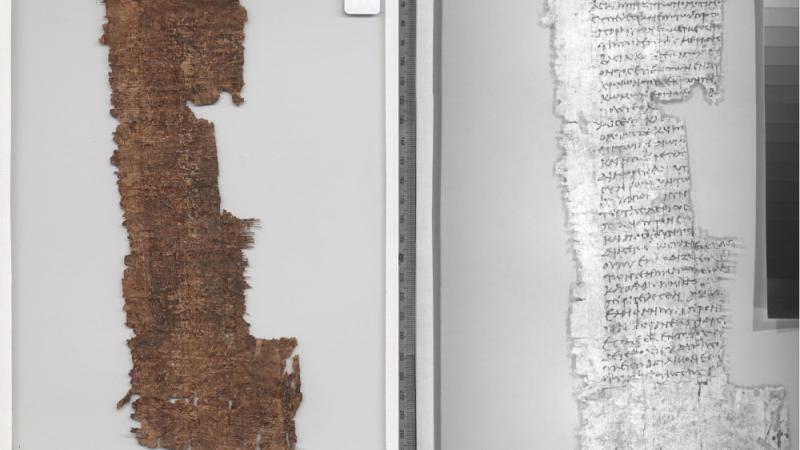 Compare the legibility of the fragment, photographed with standard photography (on the left) and with multi-spectral imaging (on the right).

The images are offered courtesy of the Center for the Tebtunis Papyri, University of California, Berkeley (left) and of the Ancient Textual Imaging Group at Brigham Young University (right). 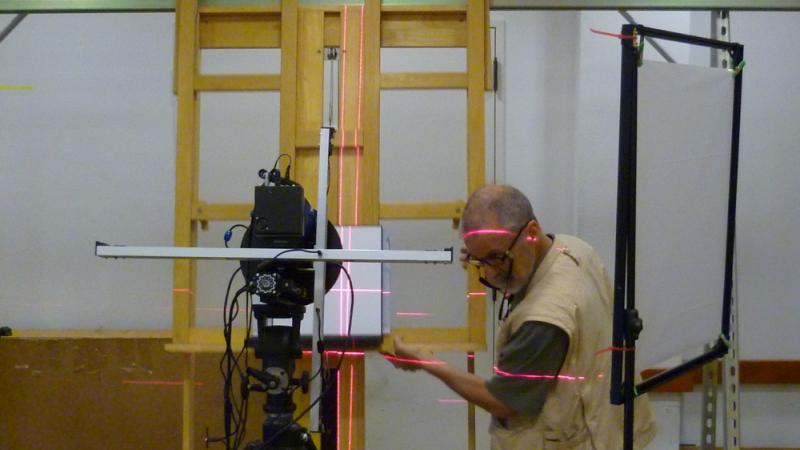 Kenneth Boydston checking the camera before imaging; the lasers ensure that the camera is well focused.

Multi-spectral imaging, a technique that has only been developed in the past decade, captures multiple images at specific frequencies of light, including ultraviolet and infrared, which are then combined to reveal information that is not visible to the human eye.  See the image gallery for an example of how multi-spectral imaging enhances the legibility of a darkened papyrus fragment, from a recent NEH-funded project at Brigham Young University.  This particular fragment, P. Tebt. 254, contains a petition to Asklepiades, overseer of the revenues, from the royal farmers of Kerkeosiris, ca. 113 BCE and was recovered from a crocodile mummy exhumed at the ancient site of Tebtunis,  Egypt in 1900 CE.  Compare the legibility of the fragment, photographed with standard photography (on the left) and with multi-spectral imaging (on the right).  It is especially valuable for recovering text that has been obscured by fading, water damage, over-painting, and palimpsesting.  Notably, the technique does not expose the already fragile map to destructive light rays.

The Martellus map project team consists of Michael Phelps of the Early Manuscripts Electronic Library, an organization based in Los Angeles, California, that uses digital technologies to make manuscripts and other historical source materials accessible for study and appreciation; Gregory Heyworth, of the Lazarus Project at the University of Mississippi, which facilitates the recovery of manuscripts through multi-spectral imaging, and another member of the Lazarus Project, Roger Easton, Professor of Imaging Science at the Rochester Institute of Technology in Rochester NY; Kenneth Boydston, a digital imagery pioneer and CEO of MegaVision; and Chet Van Duzer, a specialist in the history of cartography at the Early Manuscripts Electronic Library, and the director of the project.

Roger Easton checks the positioning of the map for the next shot; Gregory Heyworth operates the computer that controls the camera; and Michael Phelps monitors the process.

Van Duzer and his colleagues transported a custom-designed multi-spectral imaging system (see images in gallery) from Oxford, Mississippi, to New Haven, where they are working closely with the curators and the digital technology team at the Beinecke Library.  They divided the Martellus map into 55 overlapping regions, or tiles, and took 22 images at varying wavelengths per tile.  When the project is completed next year, digital processing should reveal any previously illegible text and images on the map.  With metadata assigned to the images, information will be made available about the content and imaging conditions.  Images of the Martellus map and metadata will be made freely available to the public in early 2015 via the Beinecke Digital Library Web site.  National Geographic is also planning an article on the Martellus map with publication of the multi-spectral images.  Thanks to NEH funding, the public will shortly have access to a set of technical images of the map that will reveal knowledge about map making and geography at a critical moment of global exploration.