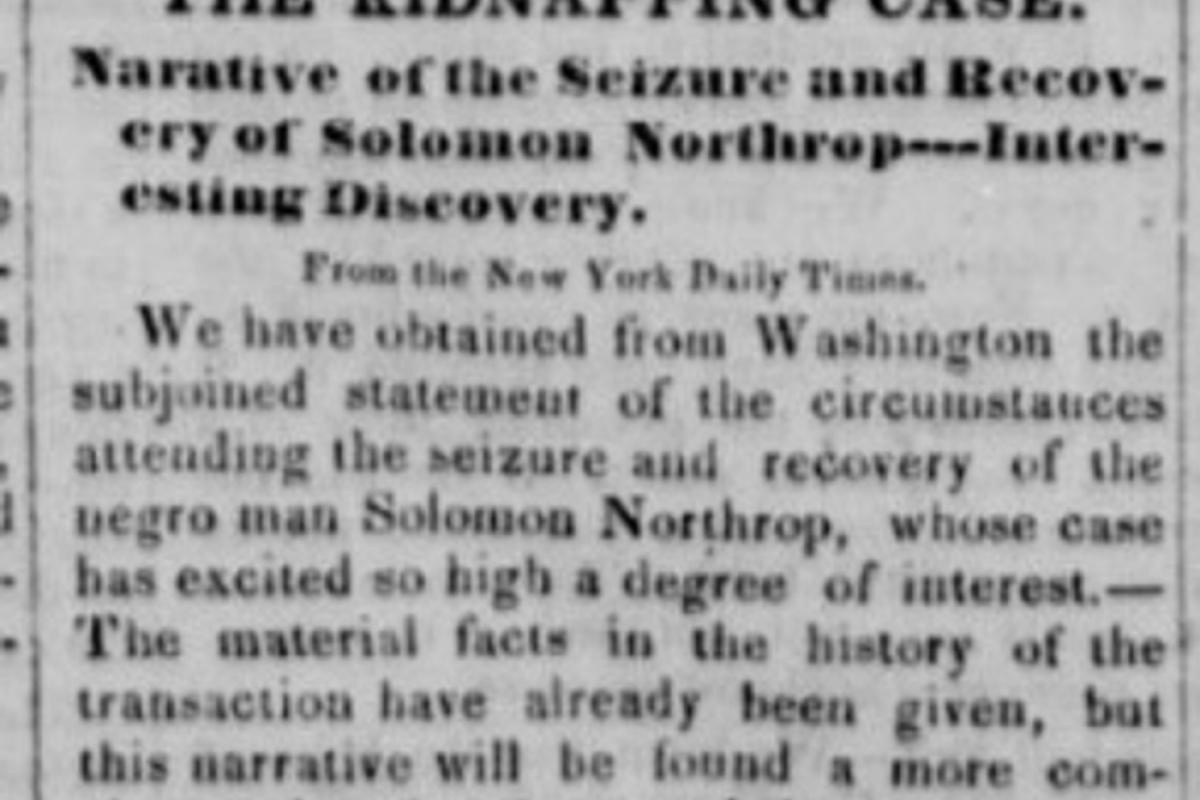 Image provided by University of Vermont

From time to time, we like to highlight dispatches from our state partners participating in the National Digital Newspaper Program, a joint sponsorship between the National Endowment for the Humanities and the Library of Congress to create a national, digital resource of historically significant newspapers published between 1836 and 1922, from all states and U.S. territories. The following dispatch comes from our Vermont state partner, the University of Vermont.

While the Academy Award-winning film, 12 Years a Slave, has recently been the subject of articles in Vermont newspapers, stories about Solomon Northup, a free black man from New York State who was kidnapped and sold into slavery, first appeared in Vermont papers during the 1850s.  A search of Chronicling America titles indicates that Vermont papers printed articles about Northup’s rescue and also covered the subsequent arrests and trials of his kidnappers and the man who sold him into slavery.

On February 10, 1853, a long article from the New York Daily Times appeared on the front page of the Vermont Watchman and State Journal. In great detail, it described Henry B. Northup’s 1852 journey to Louisiana to rescue Solomon Northup and the arrest and trial of James H. Burch, the Washington DC slave trader who sold Solomon Northup in 1841. Burch convincingly argued that he sold Northup believing that he was a slave, and the court discharged the case.

Later, the two men who kidnapped Northup were identified and arrested. On August 9, 1854, the Middlebury Register ran a short article anticipating that the kidnappers were “likely to end their base careers by TEN YEARS OF SLAVERY in the penitentiary.”

On November 1, 1854, the Register reported that the kidnappers’ trial was delayed by the lack of witnesses. In February 1855, the Vermont Watchman reported further delays because the defendants raised jurisdictional issues. Ultimately, the case collapsed and the two men spent only seven months in jail.

The Vermont Digital Newspaper Program recently digitized three antislavery papers, including the Green Mountain Freeman, which will soon be available at Chronicling America. On January 23, 1855, the Freeman reported that sixty people who gathered at the Free Church in Montpelier gained “a new feeling of hatred and horror of slavery” when Solomon Northup lectured about his twelve years of bondage.

The Middlebury Register reported a strange twist in the Northup story in its August 1, 1855 issue. An article reprinted from the Whitehall (NY) Chronicle described the arrest of Henry B. Northup, Solomon’s rescuer, in Pittsburgh on charges of being a slave catcher. He was released only after a telegram from New York confirmed that he was indeed not a slave catcher.

For more information about Vermont Digital Newspaper Program, please visit us at https://library.uvm.edu/vtnp/.