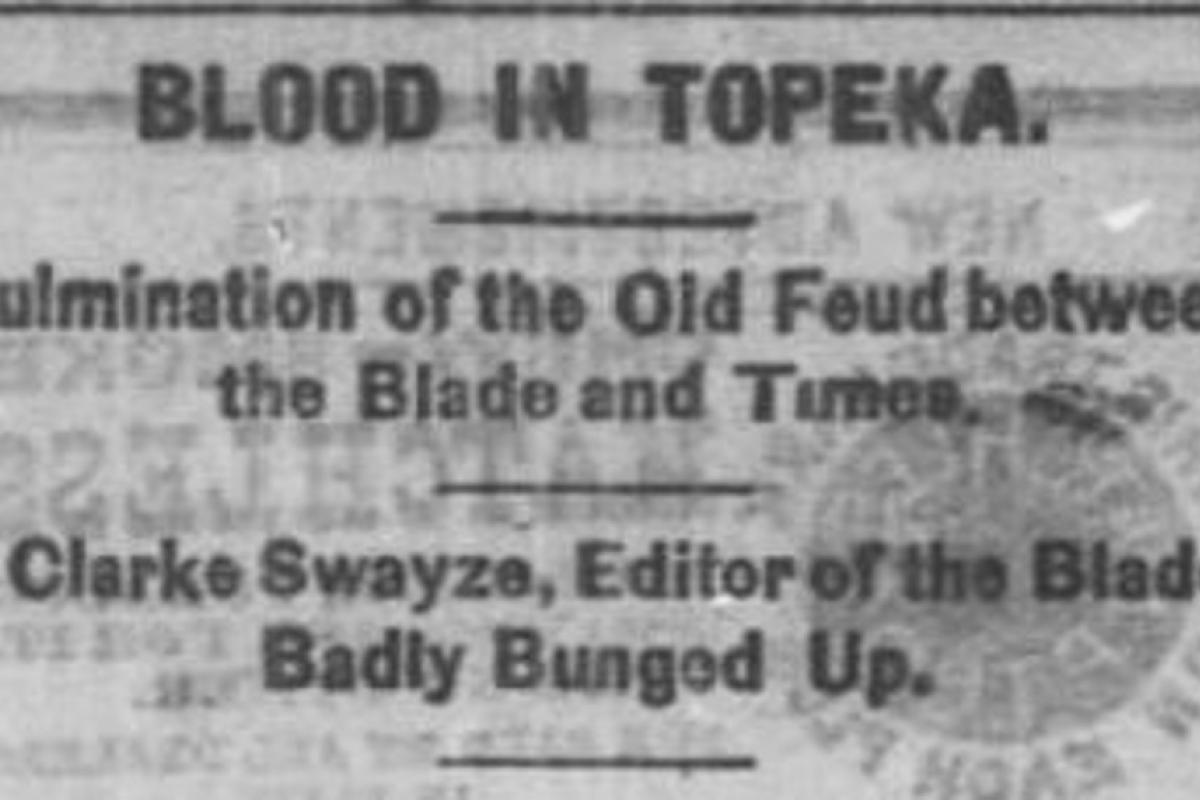 Courtesy of the Kansas Historical Society

From time to time, we like to highlight dispatches from our state partners participating in the National Digital Newspaper Program, a joint sponsorship between the National Endowment for the Humanities and the Library of Congress to create a national, digital resource of historically significant newspapers published between 1836 and 1922, from all states and U.S. territories. The following dispatch comes from our Kansas state partner, the Kansas State Historical Society.

While working on the National Digital Newspaper Program (NDNP) at the Kansas State Historical Society in Topeka, Kansas, an interesting story of violence, intrigue, and…newspaper editors was uncovered.  It shows how hidden gems of historical significance can be found in old newspapers.  And now, thanks to the NDNP and National Endowment for the Humanities (NEH), a little bit of digging can reveal a wealth of information.

The story centers on two newspapermen from Topeka, a rapidly expanding farming community and railroad hub in eastern Kansas.  J. Clarke Swayze was the editor of the Topeka Blade, and John W. Wilson was a former editor of the Topeka Times.  The first incident chronicled in the local papers was a confrontation between Swayze and Wilson on March 10, 1877.  A war of words between the two Topeka editors had graduated into a physical confrontation. There are conflicting reports on what happened, but most agree that Wilson hit Swayze multiple times until he fell prone, where Wilson continued to kick Swayze until the confrontation was broken up.

The beating did not seem to deter Swayze from continuing to write about Wilson in the Blade.  Two weeks later, Wilson again confronted Swayze; the facts of exactly what happened differ from paper to paper, but both men produced pistols and exchanged fire and Swayze fell prone.

The murder of J. Clarke Swayze is only half of this story.  Depending on the newspaper, how the confrontation began, the motives of the principals, and the assignment of blame, all vary wildly.  Nineteenth-century newspapers often included excerpts from rival journals that were carefully dissected to call attention to inaccuracies and falsehoods.  According to the Leavenworth Weekly Times, for example, Swayze was an innocent victim.  He had published an article about Wilson being a gambler who was required to pay his fine, which was public record: “The filing was an official transaction that officially revealed a criminal in his dangerous character, and removed the veil of privacy that every decent newspaper feels bound to respect with private citizens.”

From the standpoint of the Weekly Kansas Chief, however, the Blade had been abusing Wilson for a long time and Swayze was known to slander any man or woman he disliked: “We cannot endorse this manner of revenge,” said the Chief, “but if it was ever deserved by any man, Swayze was entitled to it.  It seems to have been about the only available means of defense against him.”

The Leavenworth Weekly Times, which had defended the Blade, also claimed Swayze’s murderer had an accomplice.  A rival editor of the Topeka Commonwealth, F. P. Baker, was thought to have spurred Wilson to shoot Swayze.  Baker employed Wilson as a “sub” at his newspaper after Wilson left the Topeka Times.    “The facts are that many people, the [Leavenworth] Times with the rest, thought Baker, through the columns of the Commonwealth, pursued such a policy that it emboldened and encouraged Wilson to whip Swayze, and, finally shoot him.”

However, papers such as the Emporia News and the Weekly Kansas Chief charged that the purpose of these accusations “is not to excite feeling against the crime of murder, but to use this murder as a means of creating public feeling against Baker.”  According to the Weekly Kansas Chief,   it is important not lose sight of “the fact that the Blade was devoted wholly to scurrility and scandal, and that no age, sex or condition was safe from [Swayze], except through the sole means of buying his silence with money.”

So who was at fault? Was Swayze a scurrilous blackmailer? Did Wilson’s employer really instigate the killing of Swayze?  Perhaps further research into the newspapers will reveal the answer.  With the sources provided by the NDNP and NEH, there are hundreds of other untold stories like these, just waiting to be discovered.