Drs. Timothy Moore and Sharon James co-directed a 2012 NEH summer institute for college and university teachers on Roman comedy and ancient performance. Their seminar resulted in a video series of Summer Scholars acting out scenes from some of the 26 Roman comedies still in existence, authored by Plautus and Terence. Summer Scholars learned and played their parts in Latin and English, with masks and without.

To learn more about the seminar and performances, we talked with the project co-directors.

Why did you decide to do a summer institute on Roman comedy?

Tim: I wanted to get a chance to see in practice how performance might affect how we interpret the plays of Plautus and Terence, especially the difficult scenes.  I was also eager to test some of my own theories about music in Roman comedy.

Sharon: I found myself becoming more and more unable to figure out how certain scenes and aspects of Roman comedy were performed and received, and I finally decided that I needed to see these scenes performed in different ways, most particularly with music.  Also, I was looking for ways to think about how Roman comedies might be performed now.  A summer institute was literally the only way to meet these goals, as it would allow both intensive study of ancient performance and extensive experimentation with modern performance.

Where did you discover Roman Comedy?

Tim: I first read a play by Plautus in a World Literature course as a freshman at Millersville University.  I then read Plautus and Terence in Latin a few years later and became enamored of the playwrights’ language and intrigued about what performance of these plays might have been like.  That mystery of performance has held my interest ever since.

Sharon: I took a course in graduate school on Roman comedy and its post-classical role in European theater, from my advisor, W. S. Anderson, an international expert in Greek and Roman New Comedy.  In that class, I began thinking systematically about gender roles and issues in Roman comedy, and I’m still doing so today.

What made you want to specialize in it?

Sharon: It’s the only literary or dramatic genre to feature average women (as opposed to goddesses, queens, or mythical heroines) in normal human life and in average, daily interactions between men and women, among family members and neighbors, between slaves and owners. These interactions rehearse (obsessively) gender values and issues, with the peculiar and disturbing feature of rape. It dramatizes social and cultural values and tells us some of the things that were considered funny in the ancient world, as well as giving us a version of Latin as spoken by people on the street (as opposed to orators in the Senate).  The ancients thought these plays reflected their lives, a fact I keep returning to.

What questions are scholars of Roman comedy asking about these plays now?

Tim: Questions of performance remain central: what can we learn about the plays by envisioning them on stage?  Equally important is how the plays reflect Roman society, especially gender and social class, and what in turn that can tell us about those issues in our own and other societies.

Sharon: As Tim said, performance is a major subject, and will remain so. Social and historical issues are becoming ever more important, with focus on slavery, slaves in the viewing audiences, and gender issues, particularly rape and prostitution.  Linguistic studies also continues to be an important topic.

What is the history of Roman comedy in scholarship? Where do you hope to see it go in the future?

Tim: Scholarship on Plautus and Terence has been robust for some time.  What is important is that  scholarship be informed by an awareness of performance possibilities and the significance of performance: that is what we hoped to encourage through our NEH summer institute. One area where a revival is desirable is the performance of Plautus and Terence, especially on the professional stage.  I would hope our institute might encourage more directors to perform these plays, which have much to say to contemporary audiences.

Sharon: Studies in this field have been increasing exponentially in the last fifteen years, and will continue to do so.  Roman comedy is an exceptional source for social life in antiquity, as well as for theater and performance.  These plays are rarely staged, however, and we hope the institute will encourage more productions of them.

These plays feature elements like rape and torture as humor. How are we to understand and translate these elements in modern times?

Tim: Our best way of responding to these elements, I think, is to acknowledge them rather than seek to ignore or hide them. The greatest lesson I learned from our NEH summer institute is that one need not conceal disturbing elements in order to be funny.  A scene can be very funny and still very disturbing at the same time.  We should give the Romans credit for experiencing this paradox just as we do in our own darker comedies, even as we acknowledge that what people find funny can change dramatically over time.

Sharon: This is the basic question that drove me to decide that I needed to see different performance versions of scenes from Roman comedy.  It’s why we chose the particular scenes that are featured in the institute’s videos.  My own students kept asking me, “How are these jokes funny?”  “How could the Romans have laughed at plots involving rape?”  Performance was the only way to start thinking about how to answer these questions.  One of the greatest revelations, for me, from the institute was to see that in performance these disturbing scenes can be both disturbing AND funny.  I’ve always thought that for modern performances, special attention is needed in the dramaturgy—the playbills need to give concise but focused information, so that modern viewers can both understand the ancient contexts and think about how they personally respond to the disturbing context.  One of the things these plays inevitably bring out is the issue of how humor changes and develops over time.  TV comedies in the 1950s used to joke about domestic violence, but that subject is no longer considered funny or light.  Modern productions of Taming of the Shrew have to face up to what now looks like abuse of a woman.  What do those changes say about changed social values now?  Roman comedy can help us to think about such questions.

Tim: Paradoxically, performance can both remove and add to the discomfort caused by these disquieting elements.  On the one hand, so much goes on in performance that an audience can sometimes be distracted from uncomfortable realities that they might think about more when reading the plays.  On the other hand, actually seeing and hearing such things as threats of torture can bring disturbing elements to the forefront in a way they can never be in a written text.

Sharon: Performance is crucial to understanding the plays—it’s one of the reasons there are so many performances of Greek tragedies and of Aristophanes (not to mention Shakespeare).  In merely reading a play, we tend mentally to eliminate things like silent characters, who can have an important influence on a scene.  It is impossible, in reading a play, to imagine the effect of music on a scene.  Players can be very bothered by the disturbing elements of a scene, as often happens in, say, violent tragedies, but violence or torture in a comedy is disturbing in a different way.  In those circumstances, the director and actors must decide how they want to handle the material.  This issue is one of the questions that motivated us to create the institute.

How would you like to see this Institute’s methods applied in future classroom education or Institutes? How will you apply these methods to your own classes? Would other fields outside of classics benefit from the intersection of performance and scholarship?

Tim: First, I would like to see teachers of Roman comedy use our videos, especially those that show varied performance styles of the same scenes, to show how performance choices can determine tone and meaning of dramatic texts.  Second, I would like teachers to have students perform scenes at every opportunity and discuss performance choices.  I do both of these things in my own classrooms and will continue to do so.  Future institutes could effectively apply our methods, mixing scholarly presentations and discussion with videotaped performances, to other performance genres, including, for example, Greek tragedy, other dramatic traditions, and even nondramatic performances such as oratory.

Sharon: I, too, would like to see more experimentation with, and performance of, Roman comedy.  I hope the institute will encourage more teaching of Roman comedy, both in Latin and in translation, and I hope that the institute’s videos will be used in classes.  In my own classes, I will certainly incorporate more performance of scenes (something I have already done), and I will require my students to read scenes wearing masks.  I think any number of fields outside Classics can benefit from the intersection of performance and scholarship.  For theatrical traditions that are rarely performed, this model can be really useful.

How was Roman comedy staged?

Tim: Roman comedies were generally presented in outdoor theatres, sometimes with the audience sitting on the steps of temples, which were raised very high above the ground.  Actors (all male) performed in masks on temporary stages.  All scenes occurred on a street in front of one to three houses, which were shown on the backdrop.  An instrument called the tibia (two pipes played simultaneously) accompanied large parts of each performance, during which actors sang and danced.  Plays were generally presented at festivals in honor of a god or at funerals of leading citizens.

What discovery about Roman comedy, theater history, or theater performance did you make during the course of the institute? How will this institute contribute to your scholarship?

Tim: In addition to my awareness noted above about humor and discomfort, I learned that repetitive music, even to our ears accustomed to great musical variety, can be effective in performance of a dramatic scene.  The institute will be very helpful to me as I continue to think about how performance, especially music and dance, made ancient theatre what it was.

Sharon: For me, personally, watching the performances in masks was a revelation, and it helped me to a better understanding of all of ancient drama.  Modern realistic theater relies absolutely on facial expressions, and we are all so used to that viewing/acting mode that masks tend to seem like an obstacle between the character and the audience.  Used properly, masks actually enhance a performance, particularly in comedy (where body movements tend to be really important).  There’s a sort of double-vision effect: the masks are both there and not there.  A further revelation was that performance really can make a disturbing moment funny, even if only in the moment.  Finally: music utterly transforms a scene or a play.  This is not a new insight, but it is so rarely observed for Roman comedies (which are rarely performed) that it amounted to a revelation. 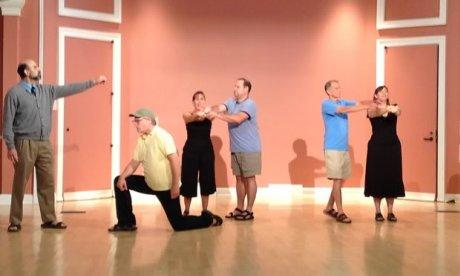