Frank Lloyd Wright and the Prairie School in the Midwest

The Stockman House, designed by Frank Lloyd Wright, was built in 1908 in Mason City, Iowa.

Wright on the Park, Inc.

Inspired by the Midwestern prairie, Frank Lloyd Wright designed buildings in harmony with the flat, expansive landscape.  They rest low and horizontal, with broad overhanging eaves.  This architecture, together with that of several colleagues, became known as the Prairie School.

According to Wright, this was a new and distinctly American architecture.

This summer, eighty schoolteachers from across the country will converge on Mason City, Iowa, to study this pioneering work in “Frank Lloyd Wright and the Prairie School in the Midwest.” The program is supported by the National Endowment for the Humanities through its Landmarks of American History and Culture program.

The teachers will attend lectures and discussions with leading scholars and visit buildings designed by Wright, Walter and Marion Mahoney Griffin, and several others.  They will also create new classroom materials to bring the workshop back to their students.

“Architecture has too long been ignored in our classrooms, so we hope to change some minds about its worth,” said Pat Schultz, Wright on the Park’s executive director. “Much can be learned about the history and values of a place, a region, or a country based on its architecture.”

Wright’s departure from European tradition spoke to a changing nation and hailed him as a forerunner of the modern movement in America.  Considered by many to be the first truly American architect, he claimed that his architecture celebrated American individualism, democracy, and the ideals of home and family.

One of his most celebrated innovations was dispensing with fixed interior walls.  This “open plan” gave rooms a new fluidity of movement and function.  It also allowed large windows, which brought in natural light and connected the inhabitant to the outdoors.

Wright advocated not only fine craftsmanship, as his stained glass and elegant furniture attest, but also mass production.  His Stockman House in Mason City, for example, was a model whose design could be reproduced for the average home owner.

For more information on this and other NEH summer programs for school teachers, as well as for college and university faculty, consult http://www.neh.gov/divisions/education/summer-programs. 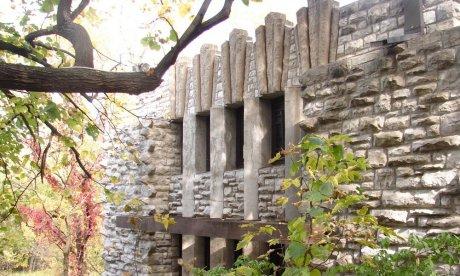 Wright on the Park, Inc.