In 1926, two young white women from Chicago, their hair cut in bobs, danced their way down to the lake, removed the robes covering their pajamas, and hopped into a canoe. In 1933, millions descended on the Chicago World’s Fair, and some documented their family highlights: rollercoaster rides, Ferris wheels, a moving tyrannosaurus rex, trains, and adobe villages with Native Americans dancing nearby. In the 1960s, Black filmmakers traced protests, violence, and movement-building on the city’s streets as they produced interviews, artistic films, and documentaries. In 1979, a huge blizzard blanketed the Midwest with over twenty inches of snow, and Chicago residents set to work digging out their cars (and placing dibs on their hard-won spots). All of these events, mundane and momentous alike, survive on films preserved and digitized by the Chicago Film Archives.

First established as a repository for the Chicago Public Library’s 16mm films, Chicago Film Archives (CFA) has grown substantially since its founding in 2003. It began with the Library’s collection of 5,000 films, and now boasts over 160 film collections consisting of nearly 30,000 media items. These films include amateur and home movies, news footage, documentaries, corporate and advertising films, biographies, and educational films.

Accessibility is a clear priority for CFA. Staff have dedicated immense time and effort to placing as many of their films online as possible. Over 2,000 films are available to stream through their online catalog. Civil rights documentaries—such as Film Group’s American Revolution 2, which follows Black Panther leaders’ efforts to build alliances with poor whites in protesting police brutality—trace Black activism and filmmaking in Chicago. Scholars of the performing arts, particularly dance, can access video footage of performances, rehearsals, and television specials from two prominent American choreographers: Ruth Page and Sybil Shearer. Home movies from families across the Midwest provide scenes from high school dances, beauty pageants, professional and amateur sporting events, and family vacations across the United States and around the world. Many digitized films are also available through CFA’s YouTube channel, which includes incredible footage from the Russ and Sylvia Davis Collection of professional men’s and women’s wrestling matches from the 1950s and 1960s.

CFA has received nine Preservation Assistance Grants from the NEH. The first, in 2007, allowed it to hire consultant William O’Farrell for a preservation assessment. In its application, CFA expressed hope that this assessment would establish a long-term plan for developing into “an expansive and robust regional film archive where Midwest films are housed, preserved and accessed for programming, preservation, research and further production.” CFA has become such an archive. First run by all volunteers, it now has six paid staff members. Seven Preservation Assistance Grants have gone toward implementing the plan developed during that first assessment by purchasing film canisters, a refrigerator for damaged films, a freezer for nitrate films, and extensive steel shelving to correctly house the rapidly expanding collections. A 2016 grant funded a digital collections assessment, which has helped CFA expand its digitization capabilities. This capacity has been central to its growing online presence and its ability to generate income for the organization by digitizing materials for individuals and institutions. 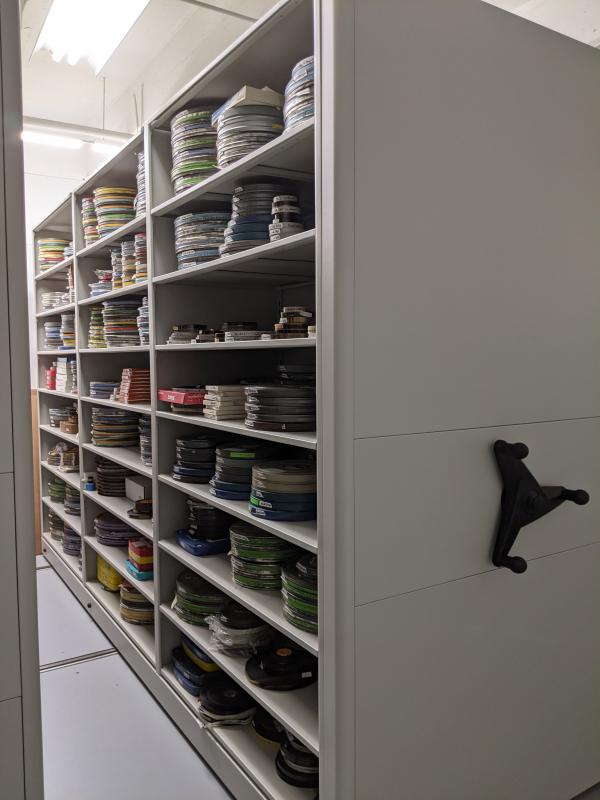 When the COVID-19 pandemic impacted CFA’s ability to provide digitization services for clients, a 2020 CARES grant allowed it to retain its staff and devote attention to four large collections that had been awaiting processing and digitization. Among them are the Frank Koza Collection, which includes broadcast news footage from the 1930s through the 1980s, and the William Franklin Grisham Collection, which documents the work of Ebony Studios (1915–1919), a producer of silent films for the African-American community. The technology and knowledge obtained through its earlier digital collections assessment means staff will be able to confidently process and digitize these collections, and CFA anticipates adding at least 75 of these newly processed films to its website.

In an email, CFA’s executive director, Nancy Watrous, explained that the greatest benefit provided by these grants from NEH has been the opportunities they created to establish “continuing dialogue (and friendship) with advisors and consultants” throughout the preservation field. CFA has drawn upon and learned from these relationships as it envisioned the potential paths its growth and programming could take.

CFA not only gained access to these networks of expertise, but also joined them as contributors. Now, CFA partners with institutions such as the Chicago Academy of Sciences in order to provide expertise on the preservation, storage, and digitization of film. It also regularly hosts interns who gain experience in this work and carry their skills into future careers. Finally, the website contains helpful directions for everyday people on how best to care for their own home movies, offers services for digitizing home movies, and serves as a repository should families decide to donate their films to the archive. CFA reminds us that everyday family moments can become powerful primary sources for future generations, as long as we take care to preserve them.

Chelsea D. Chamberlain is a summer intern in the NEH Division of Preservation and Access and a PhD candidate in history at the University of Pennsylvania. She studies the history of disability, childhood, and citizenship in the nineteenth- and twentieth-century United States.