The Planter of Modern Life: A Q&A with Stephen Heyman

If the name Louis Bromfield doesn’t ring a bell, don’t worry, you’re not alone. As author and NEH Public Scholars award recipient Stephen Heyman writes, “If Louis Bromfield ever appears in a book today, he is shoved into parentheses or buried without ceremony in a footnote. If we remember him at all, it is only as a character in somebody else’s story.” In his new book, The Planter of Modern Life: Planting the Seeds of a Food Revolution (W.W. Norton, 2020) Heyman restores Louis Bromfield to the role of protagonist not only in his own life story, but in a story that continues to unfold today across America in agriculture and politics and at restaurants and dinner tables. “What is surprising is not that he has his own story to tell, but that, six decades after his death, that story suddenly feels important.” 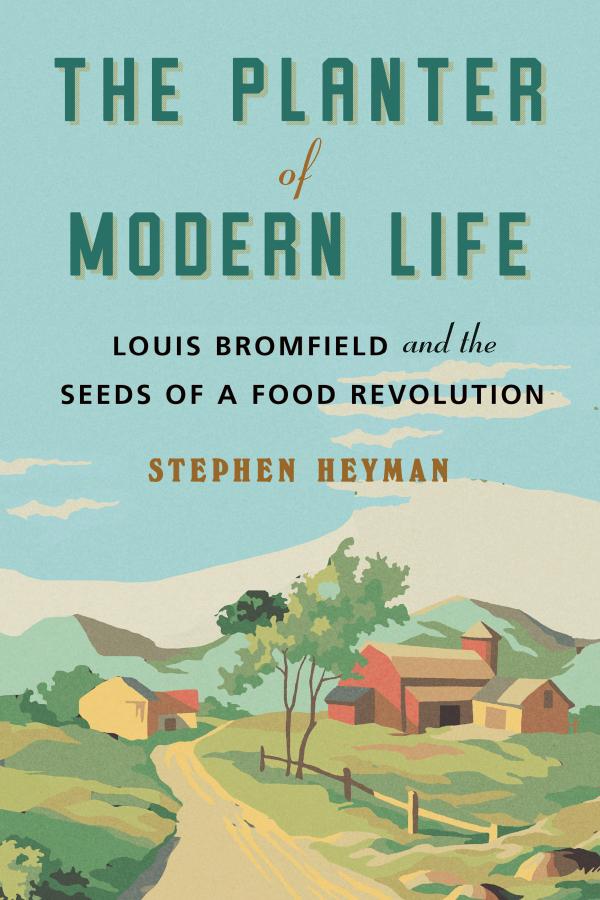 I caught up with Stephen Heyman to discuss his project and the legacy of Louis Bromfield.

1. Tell us about your project. Who was Louis Bromfield?

Louis Bromfield once joked that his life was split between “nightclubs and manure piles.” He rose to fame as a Pulitzer Prize-winning Lost Generation novelist. In France, where he lived between the wars, he was known as much for his best-selling books as his spectacular riverside garden, which attracted movie stars, aristocrats and all kinds of writers (including his close friends and fellow gardeners Gertrude Stein and Edith Wharton). In 1938, Bromfield returned to his native Ohio, transformed 600 acres of worn-out land into the thriving experimental Malabar Farm, and in the process transformed himself — from a globe-trotting literary playboy into America’s most famous farmer. From his rural seat, Bromfield began the struggle for a truly sustainable agriculture — a struggle that very much continues today.

As Wes Jackson of the Land Institute told me, you can’t look back at ecology and agriculture in the 20th century without seeing Malabar. So much of what we consider to be the basis of regenerative farming was pioneered there half a century ago. Bromfield didn’t invent soil-saving techniques such as strip cropping, grass farming and contour plowing so much as popularize their use on a large scale, while decrying the spread of industrial farming and harmful new chemicals (he warned Americans about DDT, for instance, seventeen years before Silent Spring). His wise-cracking secretary once called him “Sinatra of the Soil.” As far as environmentalists and farmers go, he was as close as you could get to a rock star.

2. What sources did you use in your biography?

The most important source was Bromfield’s written work: not only his 30 odd books but thousands of short stories, articles, speeches and radio scripts. Then came the unpublished material: journals, memoirs, correspondence with famous friends (Wharton, Stein, Eleanor Roosevelt, Ernest Hemingway, Humphrey Bogart and Doris Duke). I also conducted research in Senlis, France (where Bromfield lived) and at Malabar. I flew to Brazil to interview Bromfield’s youngest daughter, Ellen Bromfield Geld, and her husband Carson — both major characters in the book. (Sadly, Ellen died in October 2019, before she had a chance to read it.) In addition to this primary research, I drew on secondary sources that were as eclectic as Bromfield’s life, ranging from academic papers on soil science to books on Lost Generation literary criticism to Lauren Bacall’s memoirs, which discussed her and Bogart’s 1945 wedding at Malabar, where Bromfield served as best man.

3. Given his popularity as a writer during his lifetime, the glittering social milieu of which he was a part, and his pioneering role in the sustainable agriculture movement, why do you think Bromfield has faded into obscurity?

In his time, no one understood how the different pieces of his life fit together. Literary critics dismissed his farm as the plaything of a dilettante. Ordinary farmers were suspicious of his Hollywood friends and high society connections. Environmentalists were turned off by the trashy potboiler novels he wrote to support his farm. Though he was one of the first people in the United States to popularize the principles of organic farming, organic purists — like the followers of J.I. Rodale — broke with him because he was unwilling to condemn the use of chemicals in small doses. He was too much of a pragmatist to subscribe to any dogma or school of thought. He always fought for a sustainable agriculture that could scale. His individualism and his sundry interests made him hard to categorize and slot into history. But these are also the things that make him seem so far ahead of his time.

4. The first part of your book focuses on Bromfield’s time abroad during the interwar years. Why was this period so transformative for Bromfield?

Bromfield’s experience gardening in France in the 1930s profoundly changed his relationship with the land. He saw how his neighbors in Senlis pulled a bounty of food from small plots that had been under constant cultivation for centuries. Why was this the case in France, he wondered, while in America a farmer could exhaust rich virgin soil in the space of a couple generations? Sitting in his lush garden, Bromfield was horrified by accounts of Depression-era disasters in the U.S. caused by bad farming practices, from the Dust Bowl to widespread soil erosion. In response, he wrote his first unabashedly agrarian novel, The Farm (1933), and then set off on a life-changing journey to India, where he encountered the work of Sir Albert Howard, the founding father of the organic movement. By the time he moved back to America, in 1938, he was a changed man.

5. You note that Bromfield intended his Ohio farm, Malabar, to be a model for a return to Jeffersonian ideas about farming and farmers in American society. To what extent was Malabar a success?

Bromfield liked to call himself a Jeffersonian and he designed the 19-room “Big House” at Malabar in Jefferson’s Greek Revival style. In The Farm, he wrote nostalgically about the Virginia planter’s romantic vision of America, in which virtue, freedom and democracy would supposedly flourish in a society of self-sufficient yeoman farmers. But by the 1940s, when he actually went into business as a farmer, Bromfield had to balance out his romanticism with an intense pragmatism. His brilliance came from this hybrid nature: part romantic, part realist. On the one hand, he had an infectious love of the earth, a sympathy with animals and an intuitive passion for the soil that he called being teched. On the other hand, he was a modernizer and a progressive who understood that any farming system is worthless if it doesn’t pay.

Yet, like a lot of working farmers, he struggled to make a living off the land. Even though Bromfield touted his high yields and productive agricultural methods, Malabar lost money every year it was in operation. Honestly, this had more to do with personal than agricultural failings. Bromfield lived lavishly, spent beyond his means, and invested his fortune in new farming techniques and gadgets which he reported on in his books. For a long time, he used his popular fiction to finance the farm. But as his literary reputation withered, so did Malabar’s financial well-being.

6. How would you characterize the relationship between Bromfield’s literary persona and his agrarian persona?

One of my goals in this book is to collapse that distinction. I see agriculture and literature as being two sides of Bromfield’s creative output that merge in the end. My greatest hope for this project is that Bromfield will be rediscovered as an environmental writer who belongs on the same bookshelf as Henry David Thoreau, John Muir, Aldo Leopold and Rachel Carson. This is not only because he wrote beautifully about the land, but also because he made farming into a creative expression in itself. More than any of his books, the landscapes he envisioned and brought to life — especially Malabar Farm, which is now a state park visited by thousands of people each year — were his true masterpieces.

7. Did anything surprise you in your research for this project?

I’m a city boy who knew almost nothing about farming when I began this book. I was drawn in by Bromfield’s colorful life in France, his garden parties, his style, the hilariously catty rivalry he had with Ernest Hemingway in the 1920s. Yet as I followed Bromfield’s path to Malabar, I realized that his relationship with the land was really the heart of his story, and the reason why he should be remembered. That was the moment the project suddenly clicked for me. I saw in Bromfield’s life the opportunity to write a biography of a farmer that felt every bit as epic and important as that of a great artist or politician. That challenge — its uniqueness, its difficulty — excited me, especially at a moment when we’re finally beginning to understand how essential farmers are to our environmental future.

8. Why is it important that Bromfield’s biography be made accessible to a broad audience?

Because Bromfield started an important conversation that is still going on today. That conversation is about how we can responsibly live off the land and how we can responsibly feed ourselves. Other people wrote about agriculture before him, of course, but I argue in the book that, in the work of Bromfield and his allies from the 1930s and 40s, we see the emergence of an environmental consciousness that is recognizably modern. Bromfield was the first celebrity, the first figure of national prominence, to celebrate and problematize food, to connect it to ecology, art, politics, health. In this way, he anticipated figures like Anthony Bourdain or Michael Pollan — people who have used food to tell important stories, not all of them appetizing.

Today, when we think of an agrarian writer, we usually think of the great Wendell Berry, who doesn’t own a computer and who plows his fields with draft horses. Bromfield, like Berry, also made the farm a central part of his literary project, but there was nothing atavistic about his philosophy or worldview. He was a modernist and, if he were alive today, he’d be farming with robots and have a podcast and a million followers on Twitter. In his time, he wrote books targeted at urbanites but also had a radio show and a newspaper column that spoke to rural people. He was interested in reaching everyone.

The NEH Public Scholars program for well-researched books in the humanities for a general audience is open for a second round of applications. Click here to learn more about this grant opportunity. Contact @email with questions.