This post is based on a presentation Hardy delivered at the Research Society for American Periodicals conference on May 19, 2022.

As the program coordinator for NEH’s National Digital Newspaper Program (NDNP), I’d like to offer a very brief overview of Chronicling America and then hone-in on a particular feature of this database of historical U.S. newspapers, a feature that I gather from my wanderings in various research circles is largely underutilized. These are the “title essays,” or what I have referred to in my title as “newspaper biographies.” The brief essays accompany each newspaper title and are veritable goldmines for understanding the production, content, and consumption of historical newspapers. 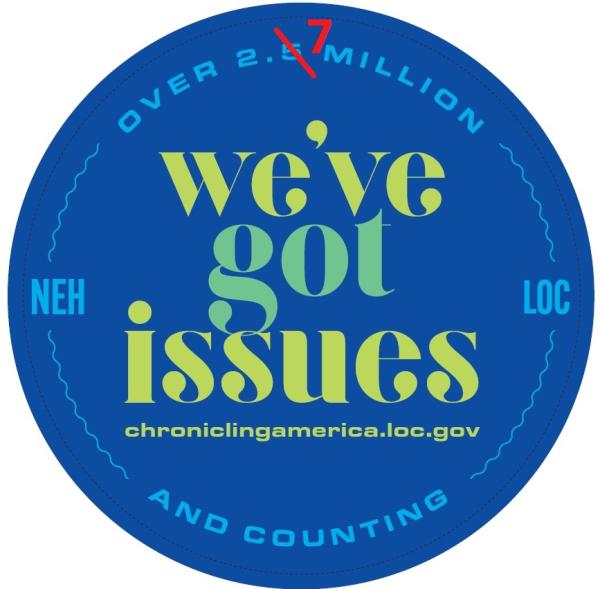 First, a quick overview. As of this writing, Chronicling America contains 2.7 million issues, 157,521 titles, and 19.7 million pages of newspapers supported by the work of partners in 49 states and the District of Columbia. Check out the project’s status page to see the latest counts and data visualizations for the latest breakdown of the linguistic, geographic, temporal, and ethnic coverage. One of the most heavily used products that the Library of Congress (LC) or NEH has ever produced, Chronicling America averages about four million visits and 47 million webpages viewed each year. Award recipients from partnering states work closely with the staff of NEH and receive guidance from the staff of LC on the technical requirements of the work. LC also contributes newspapers drawn from its own collections to this web resource and preserves all the related digital information. All of the newspaper titles in Chronicling America are fully searchable, and search terms can be limited to a particular state, newspaper, or date. Each newspaper also has an accompanying title essay that offers a brief sketch of its publication and circulation history. I would like to explain some of the background and features of these title essays. But first, a word on newspaper bibliography.

Newspaper bibliography has a much shorter and, in many ways, far less venerable history than bibliographies of bound imprints. I say this not to cast aspersions, but rather to draw attention to the fact that historical newspapers are messy. Messy to handle, messy to catalog, messy to read, messy to digitize, messy to “read” with Optical Character Recognition (OCR). It is, in fact, hard to think of a source of history that distinguishes itself so profoundly for its absolute necessity to our understanding of the past while simultaneously being one of the most difficult to preserve and make accessible. Efforts to make newspapers accessible existed in the nineteenth century, and they generally fell into two categories: (1) indexes or published catalogs of titles with few details about the newspaper, or (2) local histories that mentioned the town, county, or city’s newspaper, sometimes with a lot of detail, but in a way that was embedded into what was often a hagiographic account of the locality’s excellence.

Images of Clarence Brigham and Avis Murray from the collections of the American Antiquarian Society.

This changed in the early twentieth century when Clarence Brigham and his indefatigable assistant Avis Murray undertook a comprehensive bibliography of newspapers before 1820 at the American Antiquarian Society of Worcester. This project distinguished itself for a number of reasons, including the short essays that accompany each title listed in the two volumes of some 1,500 total pages total. This 1947 Prospectus for the Bibliography of American Newspapers, 1690-1820 boasts, “This compilation includes a brief historical account of each newspaper, with exact dates of changes of titles and names of publishers, followed by a checklist of all files located.” The brief essays that accompany each title essay were a real (and users increasingly found) necessary intervention in the accounting of historical newspapers. Part local history and part bibliography, Brigham and Murray gave us the best of both when it came to understanding who printed what, with whom, and when for early American newspapers.1

Image from the NEH-funded online version of Samuel Johnson’s Dictionary at the University of Central Florida.

And I do think of these essays as “biographies” for each newspaper, in the sense that one of the English language’s first biographers, Samuel Johnson, defined the term in the middle of the eighteenth century. That is to say, these brief essays are all about the particulars on a newspaper title, and they often reveal the human, all too human, relationships from which a given title sprung. This local particularity becomes all the more important when we are aggregating titles from wide temporal and geographic expanses, as is the case with Chronicling America. 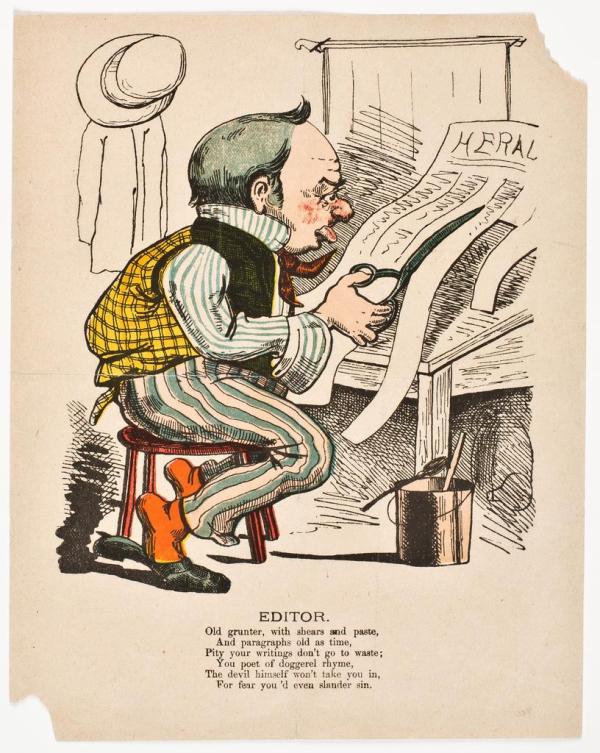 Graphics from the comic valentines collection at the American Antiquarian Society (c. 1840-1900).

Chronicling America has found a way to preserve the best of local history as well as to serve up comprehensive newspaper records by asking each state partner to include approximately 500 words of “supplementary text” or “title essays.” These essays contain basic information about the paper. They further augment the actionable data in the catalog record with details of:

• editors, publishers, or reporters of note;

• significant events covered by the paper in the relevant time period;

• relationships with other area newspapers; and

• innovations or advances in newspaper production and technology.

These brief essays appear as part of the descriptive title information. NDNP state partners research and write these essays specifically for Chronicling America. We in the NEH Division of Preservation and Access have the pleasure of editing these essays, which are starting points for additional research and understanding of the historical role of each newspaper.

Screenshot of the “All Digitized Newspapers List” in Chronicling America.

Newspapers that have title essays are identified in the All Digitized Newspapers list, where the “more info” value is “yes.” Currently, there are more than 2,000 title essays in Chronicling America, and more are being added all the time. The content of the essays can be searched through the U.S. Newspaper Directory search form, using the keyword search. Results will link to records that include those keywords. Please find more information about how to search the text in the title essays on the Chronicling America About page under “Supplemental Description.”  There, you can learn which newspaper editors fought duels or find examples of newspapers printed from linotype, or examples of newspaper subscriptions paid for by bartering. Please, dig in and enjoy because there is so much newspaper history waiting to inform, dazzle, and amaze researchers at any stage of the process.

[1] Thanks to Vincent Golden, curator of newspapers and periodicals at the American Antiquarian Society, and Michael Winship, Iris Howard Regents Professor Emeritus in English literature at the University of Texas, Austin, for conferring with me about newspaper bibliography.