Flamenco, a popular musical tradition that encompasses instrumentation, singing, and dance, is often presented as synonymous with Spain itself. This image of Spanish culture is the product of centuries-long marketing—but by whom and for whom? In her recent book Flamenco Nation: The Construction of Spanish National Identity, NEH Fellow Sandie Holguín (FB-54975-10) dives into the complicated relationship between Spain and flamenco, examining points of view from inside and outside the country. Flamenco has continued to be held in high regard by outsiders, regardless whether Spanish people supported the discourse or not. Flamenco Nation takes a look at how, across time, different social and political groups within Spain tried to raise or erase flamenco to support their aspirations for the country. “I was surprised by how much some people really despised flamenco and how they projected their anxieties and anger about Spain’s supposed backwardness onto flamenco performers and their spectators,” Holguín said. Flamenco Nation takes readers through more than four centuries, from flamenco’s fabled beginnings before the 18th century through to the 21st century and the author’s own experience of flamenco performance.

I spoke with Sandie Holguín to learn more about this project and the history of flamenco. 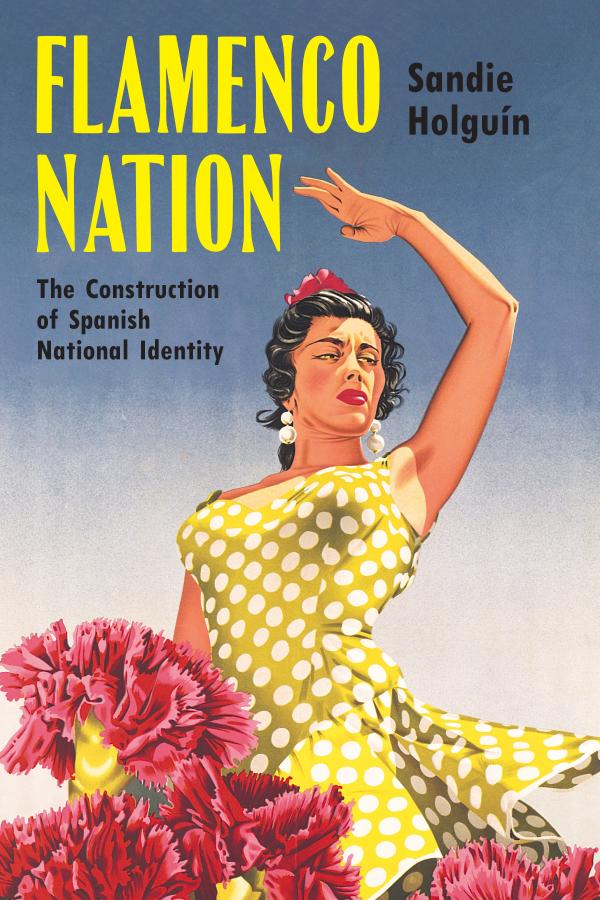 Courtesy of the University of Wisconsin Press

What are the origins of the dance we now know as flamenco? How much is known about the early development of the dance style?

Well, those are hotly debated questions! The answer often depends on a person’s political positions on race, regionalism, and nationalism within Spain. Some like to trace flamenco’s origins to the early medieval Al Andalus period, when Muslim cultural influences were strongest. Others trace it to the arrival of gitanos (Gypsies) in Spain after 1447. (Just an aside, the term gitano/Gypsy is still commonly used in Spain, so I chose to keep that terminology in my book). Contemporary scholars such as I, however, see the origins of flamenco in the late 18th century, even though its influences are tracible to earlier eras. The song and dance forms we recognize as flamenco consolidated in the 19th century. In other words, it is a modern phenomenon that paralleled the rise of other 19th-century forms of mass culture like music halls and cabarets.

The answer to your second question is much like the first. There seems to be some consensus that the dance styles known as baile flamenco were nurtured in bars, taverns, and dance academies in southern Spain—Andalusia and Murcia—during the late-18th and early-19th centuries. The dances, like the songs, emerged out of a hybrid of gitano and non-gitano Andalusian dances, and dances that came from continental Europe, Latin America, the Caribbean and, later, from African American dance forms.

In the late 19th and early 20th centuries, powerful groups from various places on the sociopolitical spectrum, including the Catholic Church, leftist intellectuals, and leading advocates of the working-class, all had complaints against flamenco as a low form of entertainment and as a negative image of Spain. If so many elites were against it, who did claim flamenco at this time?

Everybody else? The elites you mentioned certainly fought against the growth of cafés cantantes, the venues where one could most readily watch a flamenco performance, because they viewed these places as dens of iniquity from which all sorts of pornographic horrors emerged. They also resented the ways foreigners were elevating flamenco as a symbol of Spanish national identity. Flamenco performances were extremely popular, so much so, that in the early 20th century, some performers could command stadium (bullfighting ring) audiences. Some of the 19th- and 20th-century debates over the ill effects of flamenco sound very familiar to us today when some citizens complain that a city wants to tax its residents to build a giant sports stadium but does not have the political will to fight for school funding.

How did the strong identities of two regions, Catalonia in the east and Andalusia in the south, contribute to the development of flamenco as part of the national image of Spain?

Catalonia and Andalusia play great counterpoints to one another in my book. Although most people associate flamenco with Andalusia, there were also strong flamenco currents in Catalonia, despite the development of Catalan nationalism.  Catalan nationalists at the end of the 19th century worked to consolidate a national identity in opposition to the centralizing forces of the Spanish government in Madrid. They began a campaign to preserve and promote Catalan literature, music, dance, etc. But there had already been a great deal of migration from Andalusia to Catalonia in this period because Catalonia was then at the forefront of industrialization. So, the music came with this migration. Children of these immigrants, like the amazing flamenco dancer Carmen Amaya, were born and raised in Catalonia. They saw Catalonia as their home and still maintained their cultural ties to the ethnic gitano communities. In many ways, as I argue in my book, flamenco remained extremely popular, at least until the end of the Spanish Civil War in 1939, despite the Catalan nationalists’ backlash against it.

I would say that it was not necessarily Andalusian regional identity that contributed to Spain’s as a flamenco nation, so much as it was foreigners’ conflation of Andalusia with Spain. This conflation really began in the early 19th century when foreign visitors—mostly writers—visited southern Spain and wrote about their experiences in travel narratives and, later, guidebooks. They had a tendency to stereotype the Spanish women as “dark-haired” beauties and the men as bullfighters or aspiring bullfighters. These foreign tourists took their requisite tours of the cafés cantantes and then wrote about them through their own colonial gazes. They publicized and repeated these stereotypes to larger audiences outside of Spain until everybody assumed that Andalusia, bullfighting, and flamenco were the quintessence of Spain.

Most Andalusian nationalists themselves did not view flamenco as part of Spain’s national identity, with the rare exception of people like Blas Infante, the person deemed “the father of Andalusian nationalism” and the writer of the Andalusian national anthem. His story is fascinating, and I urge your audience to read that chapter to see how a person can combine history, music, and political economy to advocate for regional autonomy.

Courtesy of Epsilon68 via pxhere

What was the role of folklore in the history of “flamenco nation”?

Folklore is usually associated with rural societies, and flamenco performances were really mostly urban phenomena. One of the reasons there was a constant backlash against flamenco was because moralists viewed urban life as inherently corrupt. So, once the Franco regime came into power in 1939, many conservative groups attempted to impose what they perceived to be rural cultural values on Spaniards. To that end, the women’s section of Spain’s fascist party, the Sección Femenina, began organizing song and dance troupes known as the Coros y Danzas de España. They established these troupes to showcase the diversity of regional songs and dances throughout Spain. These groups traveled throughout Spain and, later, throughout the world, competing in international folklore contests. One of the Coros y Danzas’ stated aims was to tell the world that Spain contained wonderful musical diversity and that it should not be defined as the land of flamenco dancers. So, one can see this strong push toward folklore performances as an attempt to quell the idea of Spain as the flamenco nation.

As an art form that has been commercialized domestically and internationally, how does flamenco still maintain relevance in grassroots activism and popular movements?

Like any art form, even commercial ones, flamenco can be used as a form of social protest. One of my favorite examples of this form of protest came out of the global economic recession that began in 2008, which hit Spain—and Andalusia, especially—hard.  A group known as Flo6x8 began organizing flash mobs in banks to protest wealth inequality and high unemployment. There are some great videos of them on YouTube tossing coins in the air and beginning to sing and dance in the middle of a bank lobby. They have also disrupted the Andalusian Parliament when crucial bills have been discussed.

That’s a good question, and not always one I think about. I have a tendency at first, with all of my writing, to quote too much, because I want people to see all of the great stuff that I found. Why would they want to read my writing? Then, as with all writing, there’s lots of rewriting and paring things down. What is the most essential thing I want readers to know from the documents I’ve read? Which quotes provide the evidence I need to demonstrate my argument? That’s how I decide. And if the quote amuses me. I like to laugh, and I want to share the joy of the apt, hilarious quote when possible.

I tried to keep words that were part of the flamenco genre in Spanish, as well as words that were too cumbersome to translate into English. Words like “chulo,” for example, require almost a paragraph to explain—there really isn’t an equivalent in English. But I do have an extensive glossary in the book!

As you mention throughout the book, the authenticity of flamenco has been questioned by many different groups across time. How have you engaged with the idea of authenticity in this project?

I have looked at it with a jaundiced eye. I engage with the concept historically in the book. Across various periods of time, one group or another claims that a particular performance is authentic or inauthentic, and by inauthentic, they usually mean commercial. For my own part, while my intellectual side says that authenticity is a social and historical construction, that one can never engage an art form in its original purity—whatever that means—my non-intellectual side gets ruffled when I view a flamenco performance that I perceive as overly commercialized and geared for the tourist industry. I’m the first to say, “That is so inauthentic!” And then I laugh at my own foolishness.

Where do you see the role of flamenco going?

Like every art form that seeks to survive, I see it evolving through global exchange, but that is nothing new. Flamenco performers and choreographers have always appropriated musical styles from other places—and vice-versa. Some of the most fruitful flamenco creations have come from performers who sought to innovate. I’m thinking here of musical collaborations like those of flamenco guitarist Paco de Lucía and jazz fusion guitarists Al Di Meola and John McLaughlin. Together they popularized the genre of flamenco jazz.

This project has been many years in the making. How has it changed since its inception?

So many years! I don’t think the original argument has changed that much; that is, flamenco became a part of Spain’s national identity despite the fact that so many elites pushed back against that stereotype. I think my original ambitions for the work changed because I was unaware of how much material I would have to sort through, just in terms of secondary sources. Originally, I had hoped to include some kind of DVD that would accompany the work. I also wanted to write about flamenco guitarists, but I had to jettison the idea because the book’s length was becoming unwieldy.