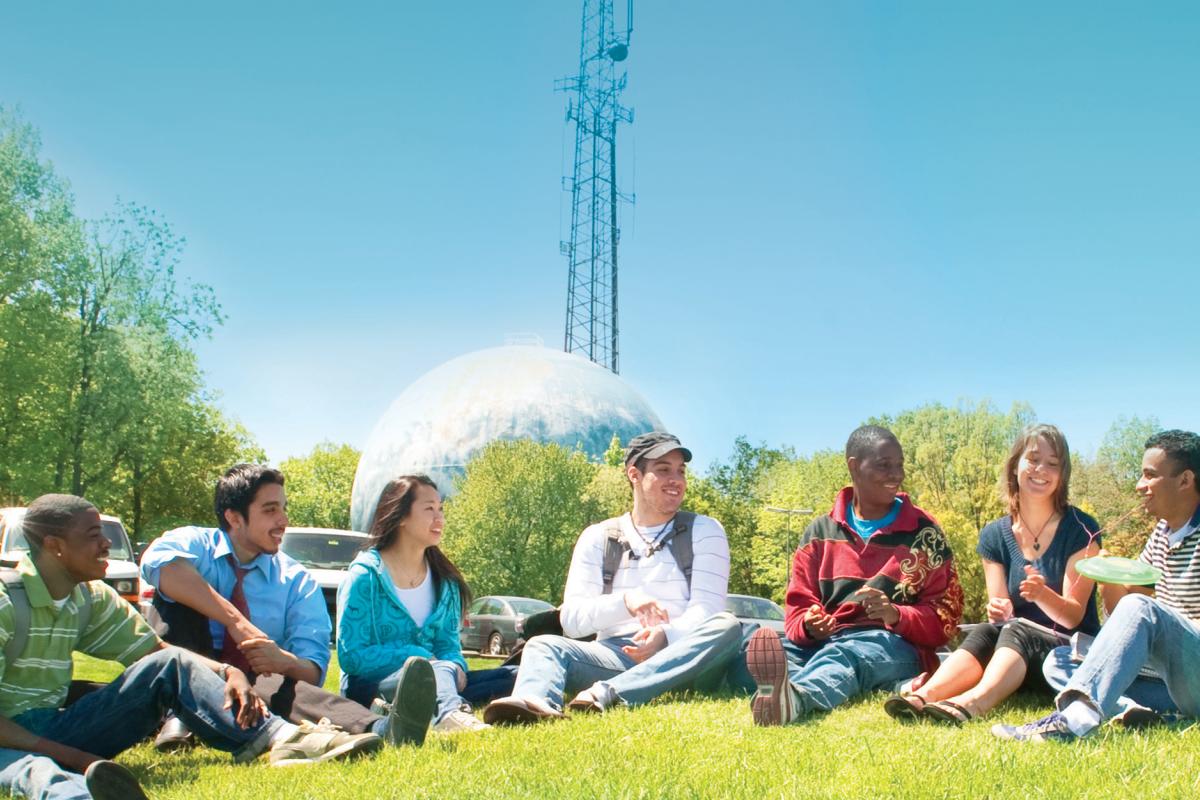 Students gather by the globe water tower on the Germantown campus to discuss the global humanities.

In the late 2000s, the cost of higher education was rapidly increasing, a fact that prompted many students to seek out opportunities at more affordable community colleges. During this period, more than half of students enrolled in institutions of higher learning were at two-year colleges. Additionally, more than half of students at four-year institutions had spent some time at a two-year college. This realization about the vital role of community colleges prompted President Obama to encourage special support for these institutions across federal agencies.

At the National Endowment for the Humanities, there was particular concern about how to encourage these institutions—already struggling with limited resources—to bolster their humanities offerings. This is what spurred the 2011 launch of the Special Initiative for Two-Year Colleges in the Office of Challenge Programs. Although this initiative only ran for three years, it produced vital humanities infrastructure for community colleges across the nation. In 2013, Montgomery College received one of these challenge grants to endow their Global Humanities Institute (GHI) which was established a year prior.

As noted in Montgomery College’s application, submitted by Dr. Rita Kranidis, for more than twenty years, Montgomery County, Maryland, has welcomed an increasingly diverse population, including a large group of first-generation immigrants. In 2018, Montgomery College was ranked as the most racially and ethnically diverse community college in the continental United States by The Chronicle of Higher Education. Therefore, when discussions began about the possibility of creating a humanities center for the college, it seemed only natural that they should take a global approach.

For decades, Montgomery College has offered a wide variety of humanities courses including art history, archaeology, English, history, and world languages. In addition, they have provided several extracurricular humanities opportunities like writing programs, their own literary journals, and a fellowship program with the Smithsonian. However, faculty and staff saw the need for better coordination among different departments and campuses in order to maximize the impact of these programs and sustain them over the long-term.

The founding director of the Global Humanities Institute, Dr. Kranidis, highlighted the five main areas that would benefit from the creation of an endowment for the GHI:

After they were offered a $490,000 Challenge grant in 2013, staff quickly got to work raising their required match of $980,000 from non-federal, third-party donors. In July 2018, Montgomery College exceeded its fundraising goal by raising one million dollars—more than half of which was given by individual donors—to fully fund the GHI endowment.

In the first year after receiving the grant, Dr. Kranidis and her staff launched the GHI’s website to provide information on humanities programs and resources across Montgomery College’s campuses as well as the surrounding area. They also expanded their foreign language offerings by purchasing software for Hindi, a language which is not widely taught at the community college level.

In order to establish consistent humanities public programming, GHI staff launched two new hallmark events, one for each semester. In the fall, they hosted “Humanities Days,” a collaboration with Montgomery College’s Paul Peck Humanities Institute to offer a variety of public lectures, workshops, and various performances over several days across all three Montgomery College campuses.

In the spring, they collaborated with the college’s STEM program to host a “STEAM workshop” to discuss global STEM issues through a humanities perspective. The STEM (science, technology, engineering, math) movement was sparked in the early 2000s to increase interest in scientific study. The “A” (art) in STEAM was later added by proponents of interdisciplinary studies who sought to combine science and technology with the arts and humanities. Over the years, their STEAM workshops have highlighted topics like the significance of water as both a vital natural resource and a cultural touchstone.

To fully integrate the global humanities into campus culture, Dr. Kranidis proposed professional development that would give faculty the tools to tackle global issues with their classrooms. The GHI funded three annual two-week faculty seminars abroad in China (2016), India (2017), and El Salvador (2018). During the seminars, Montgomery College professors had the opportunity to collaborate with scholars at institutions in those countries to learn the methods they employ in their own teaching of the humanities. These seminars abroad were very successful in enriching the faculty’s teaching practices and establishing international scholarly networks.

Another goal of Dr. Kranidis and her team was to expand the humanities curriculum at Montgomery College through two new courses, Global Classrooms and Global Humanities 101. Global Classrooms was designed to act as a virtual exchange program. Through Global Classrooms, students from Montgomery College were able to virtually connect with students from the University of El Salvador to practice their Spanish language skills and learn about each other’s culture. Global Humanities 101 was conceived as an introductory course in which students would explore humanities-based inquiry.

“STEAMed Planet: Exploring the Intersections of Global Humanities and STEM through Climate Change,” March 2021 via Zoom.

Like most other events in the last year, the GHI’s programming was affected by Covid-19 closures. Although the pandemic has disrupted their traditional in-person programming, Professor Barnes noted that they have seen a significant increase in attendance at their virtual events which she said was very exciting. When asked, she admitted that a hybrid model for public events might be an option for the future, a move which would amplify the impact of their programming and increase accessibility.

Montgomery College’s Global Humanities Institute continues to serve as an ideal model for engaging the humanities at the community college level and perfectly illustrates what it means to cultivate an institutional commitment to the humanities.

Montgomery College was awarded a Challenge grant for Two-Year Institutions (CZ-50300-13) as part of the Bridging Cultures Initiative.