Chronicling America travels to the Caribbean!

In this post, NEH Program Officer Hadassah St. Hubert is joined by National Digital Newspaper Program partners Melissa Jerome, Project Coordinator for the US Caribbean & Ethnic Florida Digital Newspaper Project at the George A. Smathers Libraries at the University of Florida, Jennifer Jackson, Cynthia Rogers, and Judith Rodgers, University of the Virgin Islands Advisory Board members. 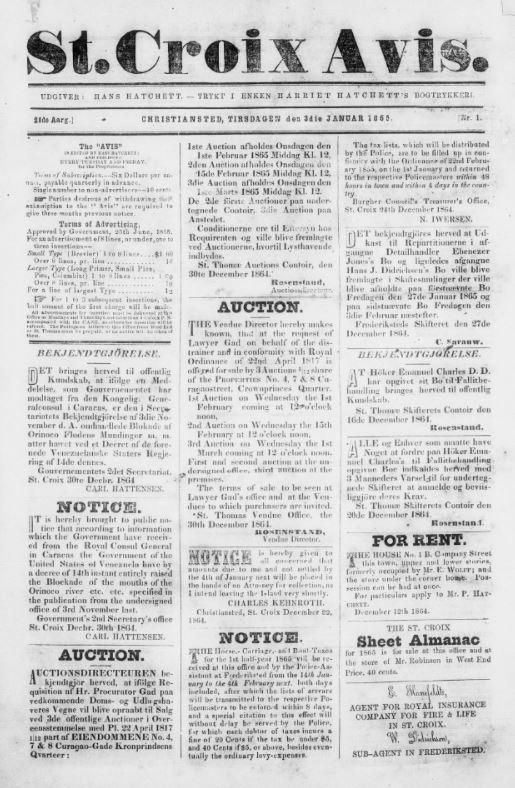 The front page of the St. Croix Avis issue published on January 3, 1865. The oldest issue of this paper is available in Chronicling America.

The St. Croix Avis is the first newspaper from the Virgin Islands to be included in Chronicling America . Issues from the St. Croix Avis published between 1865 and 1882 are now available, and coming soon are issues published through 1934. The bilingual, Danish and English, newspaper from 1865 -1916  represents a time when St. Croix was part of the Danish West Indies until the formal transfer to the United States as a territory in 1917 during Woodrow Wilson’s administration (1913-1921). The acquisition of the Virgin Islands was part of a larger process of the U.S. becoming a global power. 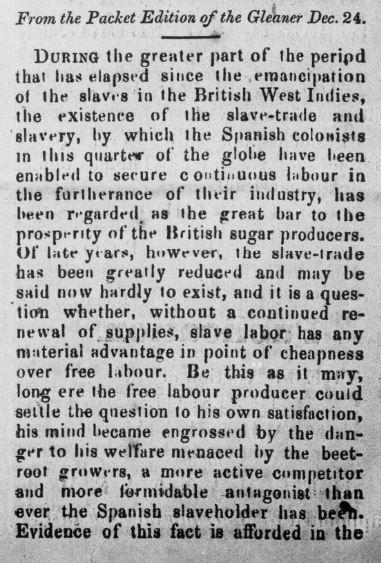 Correspondence from the Gleaner (Jamaican newspaper) published in the January 22, 1869 issue of the St. Croix Avis. The article discusses the slave-trade in the British West Indies, and the impact of emancipation on sugar production.

The content of the St. Croix Avis offers a critical regional view as the first newspaper of the United States Virgin Islands. The paper provides local insights into Denmark’s monarchy, the U.S. Civil War, the Second Mexican Empire, power struggles in Europe, as well as news from surrounding Caribbean islands. In its early years, it included recurring columns, such as “Auctions” for the sale of property and goods that depict how under Danish rule the Virgin Islands became a major trading post for sugar, tobacco, coffee, cotton, and other goods; these industries and economies were built on and depended on the work of enslaved laborers. Reports contained agricultural updates, as well as information on current local events and government related notices.  Sections such as “Colonial News,” which reported from various colonized nations in the Caribbean, including Barbados, Cuba, Haiti, Jamaica, Panama, and Puerto Rico. 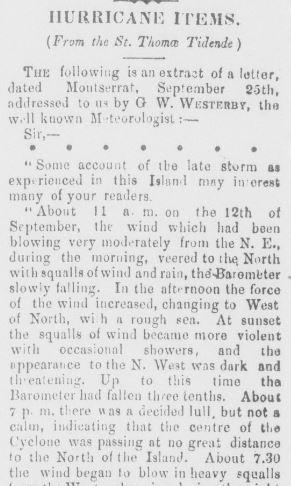 Excerpt of an account of the hurricane that affected the island of St. Thomas in September of 1876. Published in the October 7, 1876 issue of the St. Croix Avis available in Chronicling America.

The St. Croix Avis also reported on local weather and natural disasters. It frequently printed records of rainfall on the island, and coverage of hurricanes and their damage, not only as they occurred, but also on the anniversary of major events as a way to acknowledge and observe past disasters and the damage left in their wake. Reports of natural disasters extended beyond the Virgin Islands and often included coverage of their impact throughout the Caribbean. 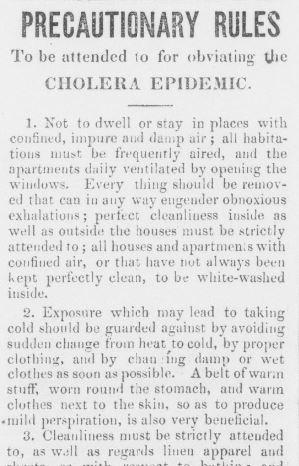 An excerpt of Precautionary Rules to prevent the spread of cholera during the epidemic of the 1860s. Read more of the guidance published in the January 5, 1866 issue of the St. Croix Avis now available in Chronicling America.

These reports demonstrate the anxieties of residents, preoccupations of the U.S. mainland with social and economic conditions, and challenges in the territory. The Avis’ journalists often compared what was happening in the European governed territories in regards to slavery on the island and its management. The paper provides a rich diversity of reporting picked up from national and international correspondents and the  Avis’ own contacts in Cuba, Latin America, and Europe. Perspectives include postal workers being reprimanded for slothfulness, letters of criticism to the Editor, to reports about the presence of yellow fever and cholera as they plagued the Caribbean and Latin America. Residents were encouraged to properly ventilate their homes, practice cleanliness, and even to sweat to discourage contagion.

The addition of the digitized St. Croix Avis is most welcome and increases access to Caribbean print and digital historical resources. This is especially true on the islands themselves.  Teaching Virgin Islands history is mandated at the upper elementary and secondary levels in the Territory’s public K-12 schools, and Social Sciences is required for first-year university students. This is a valuable resource for integration into lesson plans based on the common core and university curricula. The ability of students to view, analyze, compare and contrast Virgin Islands history as reflected in historical newspapers can also assist with the development of students’ critical thinking skills. Further the addition of the St. Croix Avis enhances genealogy research, Caribbean area studies of history and politics, social and economic conditions, colonialism, slavery, post-emancipation and labor, environmental conditions, and public health.