Chronicling America Now Reaches Back to the Revolutionary War

On this day, 244 years ago, John A. Howe published the first Loyalist newspaper in his adopted city of Newport, Rhode Island. The year before, with British forces advancing on Newport, Solomon Southwick, printer of the pro-Revolutionary Newport Mercury, was forced to disassemble his printing press and bury it under the ground in an effort to keep it out of enemy hands. Southwick’s plan failed, and when British forces took Newport in December of that year, they wasted no time digging up the press and putting it back into working order. Within the space of a few weeks, they were printing their own newspaper, the Newport Gazette under the supervision of recently arrived printer from Boston by way of New York, John A. Howe. 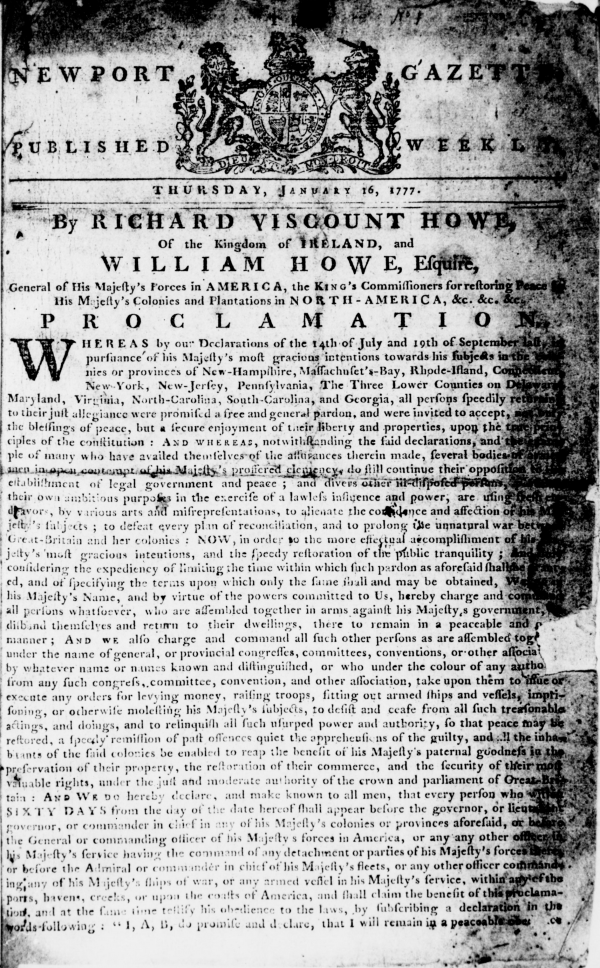 The first page of the first issue of John A. Howe’s Newport Gazette published on January 16, 1777 and available in Chronicling America.

To announce the newspaper’s political stance, both in content and form, Howe published General William Howe and his brother Navy Commander Richard Howe’s Proclamation from November of the previous year. The first page of the newspaper stands out; with its single-column, it looks more like a decree than a newspaper. The reader must turn to the verso of the first page to find the three-column format that an eighteenth-century reader would expect of. Publisher Howe wanted the brothers Howe’s Proclamation front and center, even though it had appeared in New York two months prior; this format showed, rather than just told, where the loyalties of this new newspaper would be. The Newport Gazette would not be the incendiary rag that the Newport Mercury had been. There was a new pressman in town.

In their rebuff to the Declaration of Independence, the Howes promise that all who remain loyal “inhabitants of the said colonies be enabled to reap the benefit of his Majesty's paternal goodness in the preservation of their property, the restoration of their commerce, and the security of their most valuable rights, under the just and moderate authority of the crown and parliament of Great Britain.” Such promises would matter deeply to those like publisher Howe who, like many Loyalists, escaped to Novia Scotia to continue to prosper under the British Crown. For those who remained, such promises would of course prove futile as the new nation emerged through the struggles of revolt.

A Plan of the Town of Newport in Rhode Island (1777) shows the city when John A. Howe first arrived there and the British occupied it. This map was created by surveyor Charles Blaskowitz and engraver William Faden, and is in the collection of the Rhode Island Historical Society.

NEH is preparing for the 250th anniversary founding of the U.S. with “A More Perfect Union” initiative, and Chronicling America is an important part of that work. This issue of the Gazette is now the earliest newspaper in, where it is freely available to read, download, search, and otherwise explore. The first page of this first issue, which illustrates the central role of media and media control in the making—and efforts to unmake—United States’ independence, is, temporally speaking, page one of this 17 million page database that the Library of Congress have partnered with state partners in 48 states, Puerto Rico, and the Virgin Islands to create.

The Newport Gazette is among the first set of Rhode Island historical newspapers being added to Chronicling America. And the process of making those papers available has included its own moments of adversity. The equipment and personnel for digitizing the microfilm came into place just as Rhode Island, and the nation, were going into lockdown and learning to work remotely due to the COVID-19 pandemic. Equipment, software and workflows that would be difficult to learn in average circumstances suddenly gained an added level of difficulty when the people learning them were also pivoting to remote work.

A number of nineteenth-century newspaper titles are also included in the first batch of newspapers from Rhode Island.

Overcoming those challenges makes it all the more exciting to see these newspapers become available to the public. In addition to  newspapers like The Newport Gazette, the first group of titles also includes: The Pioneer Woman’s Advocate, published by Miss Anna Spence in Providence  and which advocated for suffrage and women’s rights during the 1850s;  The Literary Echo & Pawcatuck Advertiser,  from the southern coastal community of Westerly; and The Northern Star and Warren and Bristol Gazette, out of the port town of Warren in the early 19th Century as it transferred from an economy built on the Atlantic Slave Trade. Rhode Island is a small state but its dynamic newspaper history reflects the struggles and triumphs of the American experience. We welcome these additions to Chronicling America!