Accounts of the Armistice 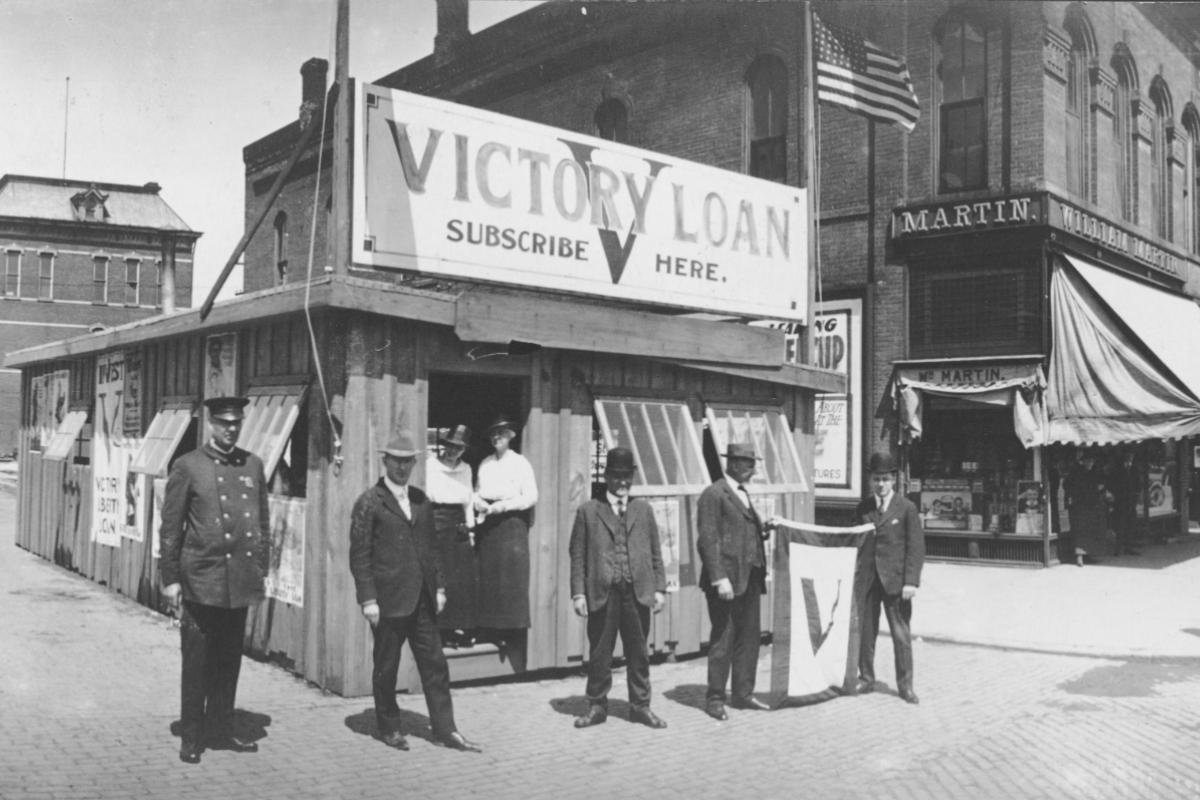 Image of a Victory Loan hut in Defiance, Ohio.

One hundred years ago, on November 11, 1918, at 11:00 am, an armistice ended fighting of the First World War. Have you ever wondered what that moment felt like? The battles had dragged on four years in Europe, with Americans actively involved for a year and a half. While over 4 million military personnel were mobilized, many more men and women went “over there” as aid workers, or took factory jobs, bought liberty bonds, and rationed their meals on the “home front.” 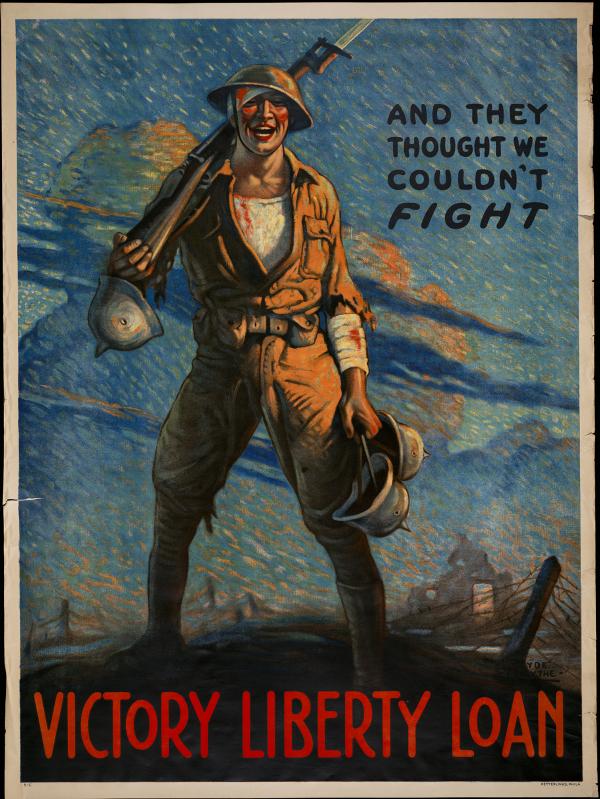 In these centennial years of American involvement in the Great War, NEH’s Division of Preservation and Access made several grants for projects fostering the stewardship and availability of cultural heritage materials from the time period. Little Stories of the Great War: Ohioans in World War I was supported by an NEH Humanities Collections and Reference Resources award to the Ohio History Connection (formerly the Ohio Historical Society) to digitize WWI materials from their own and other collections across the state and make them accessible via the Ohio Memory digital portal. Several first-hand accounts in the form of typed and handwritten correspondence and journals reflect a mixed-bag of feelings and experiences:

“It has been a week of great happenings and I know you have not been among those least enthusiastic; in fact I can almost imagine you jumping up and down and yelling with the rest of us when the news of the 11th came in. Oh, it is great and it certainly proves right must win out in the end. We here hardly expected the finish to come as soon as this…” (Newman “Bud” Ebersole in Decise, France, 11/17/1918)

“Work being light down here our minds have been taken up with the armistice proceedings lately, so it was not with the greatest surprise that we received an order on Monday telling us that the fighting was to cease at eleven o’clock and that we were not to have any communications with the enemy…The fellows got to work at once and erected an arch on which they put our American and French flags…The natives were not long in catching the spirit and soon came from all directions with colored streamers, Japanese lanterns and flowers to decorate our colors. When we finished we had quite an imposing triumphal arch of our own and as we took some pictures of it you will some day see for yourself.

It was certainly a glorious day – old women laughed and cried in turn. Of course there were those who did not know how their loved ones had fared in recent engagements but even so most everybody joined in the fun. Everybody kissed everybody else – we rather liked that practice except when it came to leather skinned old men, but the order of the day was to play no favorites so we all went merrily kissing on, never skipping anybody.” (Horace W. Rinearson in Champagne, France, 11/14/1918)

“Can you imagine the joy that hit the Section on the 11th at eleven o’clock? The church bells started it and then the factory whistles and we joined in with our klaxons and our voices. We made a triumphal arch of flowers and the section flags in front of the cars and kept it up all day in honor of the coming Peace, for we all feel sure that Germany will never start again and that the end is nearly here. Of course our minds turn to the next important thing and that is getting home to you all as quick as possible.” (Al P. Preyer, Champagne, France, 11/16/1918)

“I am very disappointed in not reaching France, but it’s all in the game. I think I will be home before Dec 25. I shall surely pay a visit to you.” (William H. White, training camp in South Carolina, 11/18/1918)

“I wish, though, that I had been with the 165th when the armistice came into effect. We were on the line as usual and advancing until 10:55 that morning. The 42nd division I believe is to be one of the American divisions to occupy Metz and Strasbourg. I’d like to see that, too. I have to [go] to the hospital Dec 15 to go before a board and if I’m lucky I’ll be sent home. I can feel in my bones that my shoulder will be very sore on that date!!” (Dalton Smith Hayes, Nice, France (injured and on furlough), 11/18/1918)

“…Paris is the one place in the world to be these days – with peace about to be signed. All the royalty coming here and President Wilson. Wouldn’t I be furious if I left with all that going on. Paris is wonderful these days – streets packed all the time – soldiers of all nationalities. I can’t tell you how it makes me feel to see ‘our boys’ especially the Y.M.C.A. men of whom I’ve seen many ‘fraternizing’ with the street girls…A certain element did go mad the day the armistice was signed but that was the element that would become delirious very easily. When I asked a Frenchman why no one really seemed to realize it, he told me that the real thinking French people had suffered too much from this war that scarcely a family in France but had lost some member. On the other hand, I suppose there are many many people who are actually sorry the war is over – especially the small shop-keepers everywhere who have more than grown rich off our foolish spendthrift boys.” (Evelyn, Paris, France, 11/22/1918)

“And now another year has rolled around and once again brought the world to that time in which mankind has always been accustomed to give thanks for the blessings of the harvests which have just been gathered in. Only this time the cause for thanksgiving and rejoicing is a hundredfold, yes. Many hundredfold greater than ever before. For the dawn of Peace has again illumined a world long struggling in darkness and misery, and suffering humanity, straightening its heavy burdened shoulders, and raising its lowered and battered head, looks toward the light and gives thanks for one transcendent moment, forgets the pains and bleeding wounds in the supreme joy of peace and victory.” (John F. Seiberling, Blois, France, 11/20/1918) 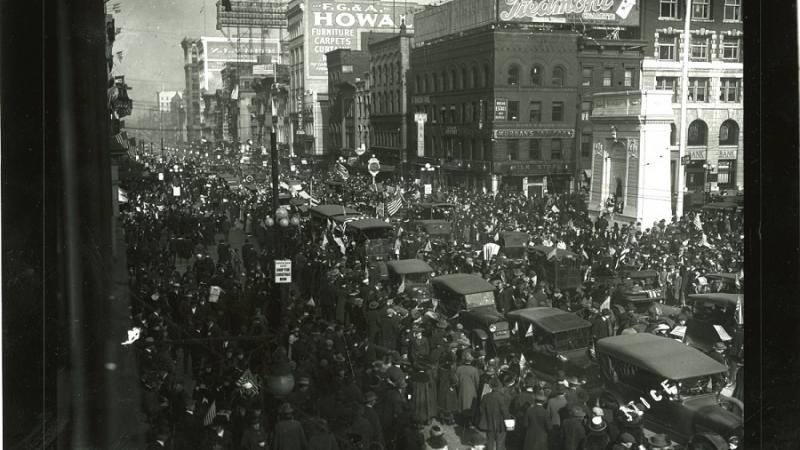 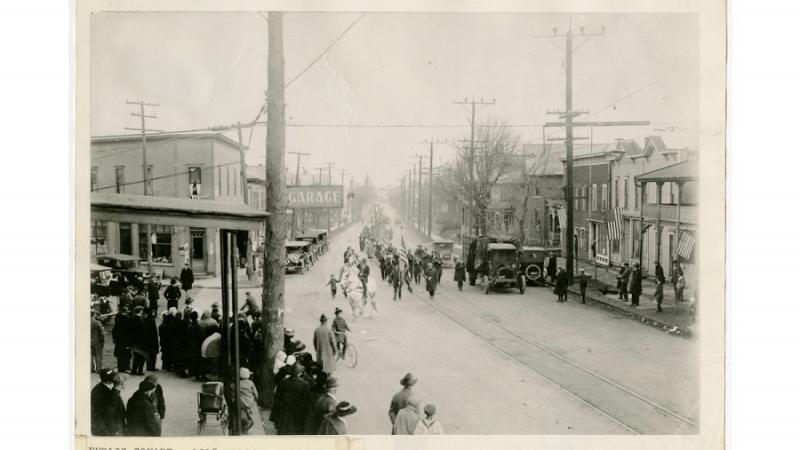 World War I Victory Parade in North Canton, Ohio. The town voted to change its name from New Berlin in 1918.

In the United States, too, there were victory parades, both large and small. After the armistice, there was still much work to be done. Demobilization from Europe took some time, especially given the Spanish Flu Pandemic, and once home, soldiers needed help adjusting to civilian life. Guides with titles such as Where Do We Go From Here, published by the War Camp Community Service, helped in this effort.

Almost two-thirds of the cost of the war was financed through four Liberty Loan Campaigns. Approximately 20 million people owned at least one bond.[1] A fifth campaign—the “Victory Liberty Loan” —was issued on April 21, 1919, to pay off additional war debt. Bonds were sold a number of ways, including door-to-door by boy and girl scouts and in huts on town squares. They were advertised, like former loan campaigns, with evocative posters of bandaged up but triumphant soldiers, dazzle painted ships upending German submarines, and the patriotic figure Columbia appealing for unity in the ever-present debates over immigration and assimilation. 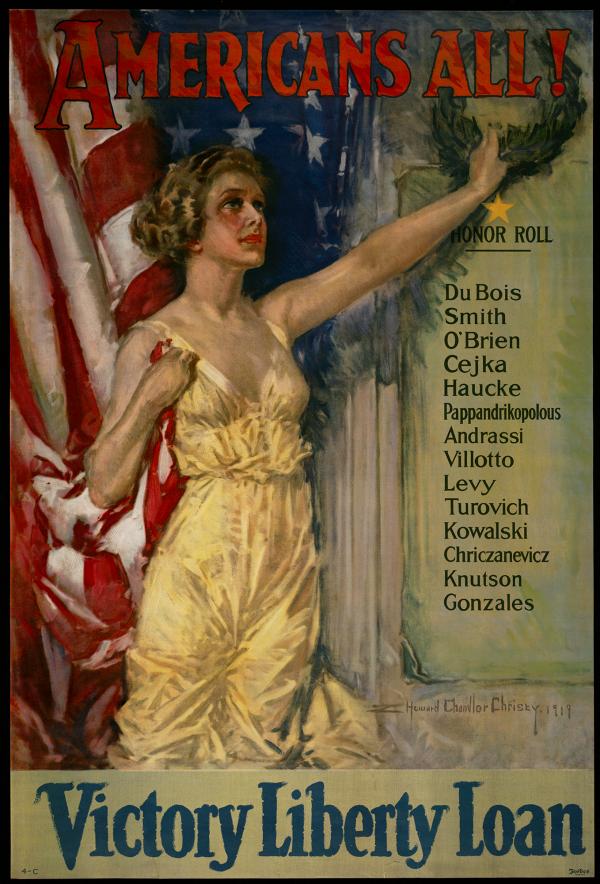 This 1919 advertisement for the Victory Liberty Loan campaign shows an idealized woman, likely symbolizing Columbia, holding a laurel wreath over a list of names of fallen soldiers. The artist, Howard Chandler Christy (1872–1952) further underscored his message of “Americans All” by listing names from a variety of ethnic origins.

This Victory Liberty Loan campaign was designed to appeal to people’s sense of gratitude. A black German submarine in the foreground is thwarted by an American ship covered in dazzle camouflage, a defensive technique with its roots in several modern art movements

Are you curious to learn more about cultural heritage and the Great War or even to help make these materials more widely accessible? Visit Ohio Memory and transcribe handwritten letters.