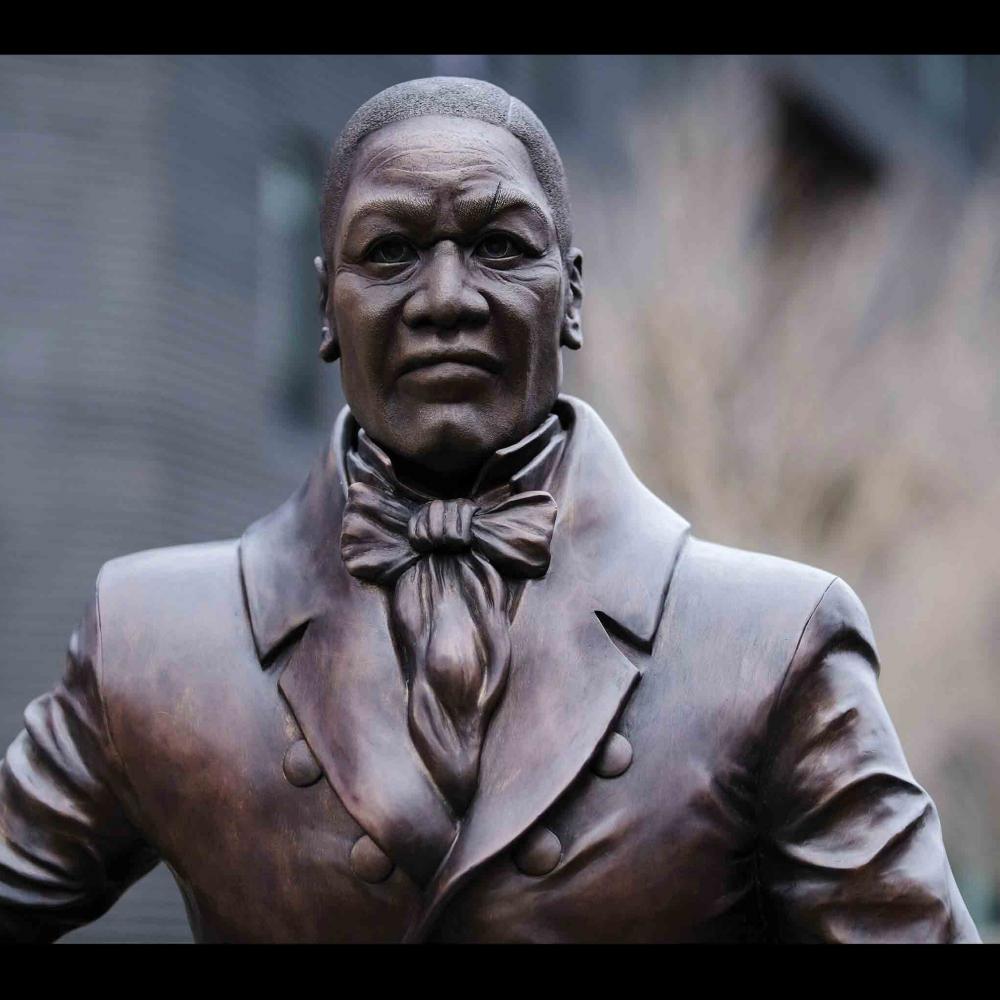 Dana King’s sculpture of William Lanson was unveiled along the Farmington Canal Trail in New Haven on September 27, 2020.

In 1845, Hartford’s Daily Courant ran a story about William Lanson, one of the “African Kings” of Connecticut. Starting in the first decade of the nineteenth century, Lanson became one of the most prominent citizens of New Haven. In business, religion, and society, he served as a beacon for an African-American community that often found itself pushed to the margins. But his success made him a target to be brought down.

Lanson was the key figure in two huge construction projects that changed the future of the city: the extensions of Long Wharf and the Farmington Canal. The building of the wharf in New Haven was one of the most impressive engineering accomplishments in the city’s history. Lanson contracted to complete the final 1,350-foot stretch, making it possible for larger cargo ships to dock. While other builders used wood on previous sections, Lanson, with a crew of African-American men, cut stone from Blue Mountain in East Haven and transported the rock on specially built scows. The boats carried as much as 25 tons of stone to the wharf.

In 1825, politician and abolitionist James Hillhouse hired Lanson to construct the New Haven section of the Farmington Canal. Lanson reportedly hired twenty to thirty African-American men to quarry and transport the stone to build walls “two thousand and ten feet in length, eight feet thick at bottom, six at top, and eight feet high,” according to Lanson’s son Isaiah. Though he never received all of the pay that was owed him, Lanson made sure to pay all his workers.

By the 1830s, according to Isaiah, Lanson’s worth was around $20,000. In addition, he was well known and respected. Rev. Timothy Dwight of Yale praised Lanson as a good and honorable member of society.

Lanson owned property, called “New Guinea,” near an Irish section of the city, and later decided to purchase a former slaughterhouse, which he developed into a series of “sheds and barracks for his tenants and customers,” as New Haven businessman Gardiner Morse described. His other business ventures included a livery stable, store, and hotel. His Liberian Hotel, located in a section of the city called New Liberia, provided lodging that boasted furnishings worth $1,000.

In 1825, Lanson was elected “African King,” or Black governor, of New Haven, a title reserved for African-American community leaders throughout New England in the eighteenth and nineteenth centuries. With the city’s Black community, he helped create the African United Ecclesiastical Society, which later became the Dixwell Avenue Congregational Church. Lanson sheltered enslaved runaways from the South, and also coordinated private religious gatherings for them. When a law forbidding African Americans to vote was passed in 1814, Lanson and others petitioned for voting rights or to be exempt from taxation. The bold filing with the Connecticut General Assembly revealed the depths of Lanson’s fight for justice. Within the pages of the Columbian Register, he declared African Americans to be an “industrious” and quality people.

But in 1831, after Nat Turner led a rebellion of Black slaves in southeastern Virginia killing more than fifty white people, support for African-American freedom in New Haven dissipated and turned into anger toward Lanson. Whites in New Haven organized to systematically rid themselves of African-American challenges to white success. Although New Haven’s African-American community of six hundred was considered to be one of the safest in the country from white hostilities, enraged whites targeted efforts of uplift for Blacks, such as a plan by Simeon Jocelyn, a respected white religious and antislavery leader, to build a college for African-American residents. Using Nat Turner’s education as fuel, white groups turned their anger against the establishment of the “Negro College.” Even New Haven’s mayor and aldermen, who normally embraced the positives of education, condemned the establishment of the “Negro College” for the “supposed harm” it would bring to white students at Yale, female seminaries, and other schools. After Irish immigrants learned that the curriculum at the college included mechanical and industrial education, they too raged against the potential of competition from well-trained African-American workers. Opposition came from the press, such as the Connecticut Herald, New Haven Palladium, Connecticut Journal, and Columbian Register. In one of the most vicious attacks on Lanson, the Columbian Register, a democratic publication, declared Lanson to be in charge of a criminal enterprise, which the paper referred to as an “African college” of vice led by President Lanson in the city.

Riots erupted in the New Guinea and New Liberia sections of New Haven; a white mob rampaged through the area seeking whites engaged in immoral vice and allowed people of African ancestry to flee. Though poor areas of most cities included pockets of crime, Lanson insisted that his businesses were enterprising and upstanding. According to historian Katherine Harris, Lanson could not fathom why, throughout the 1830s, authorities called him before the courts so much. But many in power held Lanson responsible for corruption in the city. Local police, particularly Officer Jesse Knevalis, maintained a constant “surveillance for months at a time” on Lanson’s activities. On December 13, 1845, the Hartford Daily Courant published a short story from New Haven that joyously announced that finally Lanson, the “former proprietor of the Liberia Hotel, and rascal who has caused much trouble in the city has been found guilty, convicted, and sentenced to six months imprisonment in the County Jail, and a fine of $50.” Even forty plus years later in 1887, Gardiner Morse, a local tax collector and foe, referred to Lanson as the “king of the colored race,” then coldly remarked that Lanson once found himself forced to relinquish control of properties on Franklin Street and had to move to the waterfront.

In 1851, Lanson died, following several years of poor health and business problems. Throughout his life, he had challenged laws that prohibited African Americans from voting. He had supported runaways via the Underground Railroad, and helped create independent religious institutions for African Americans. His work on Long Wharf and the Farmington Canal changed the industry and fortune of New Haven. He not only hired African-American workers but also paid them fairly. It was his support, along with that of other early founders, that allowed for the establishment and flowering of New Haven’s Dixwell Avenue Congregational Church.

No image of Lanson exists, but a movement has emerged to honor his memory. In September 2020, sculptor Dana King and community supporters saw the unveiling of King’s seven-foot bronze image of William Lanson on the Farmington Canal Trail in New Haven. In addition, the Connecticut Humanities Council awarded a grant to Site Projects, Inc., to develop an educational program on Lanson. His story, says Laura Clarke, director of Site Projects, “in all its glory and tragedy,” needs to be told.

Stacey Close is the associate provost/vice president for equity and diversity and professor of African-American history at Eastern Connecticut State University.

This article is available for unedited republication, free of charge, using the following credit: “Originally published as “William Lanson Shaped New Haven” in the Winter 2021 issue of Humanities magazine, a publication of the National Endowment for the Humanities.” Please notify us at @email if you are republishing it or have any questions.