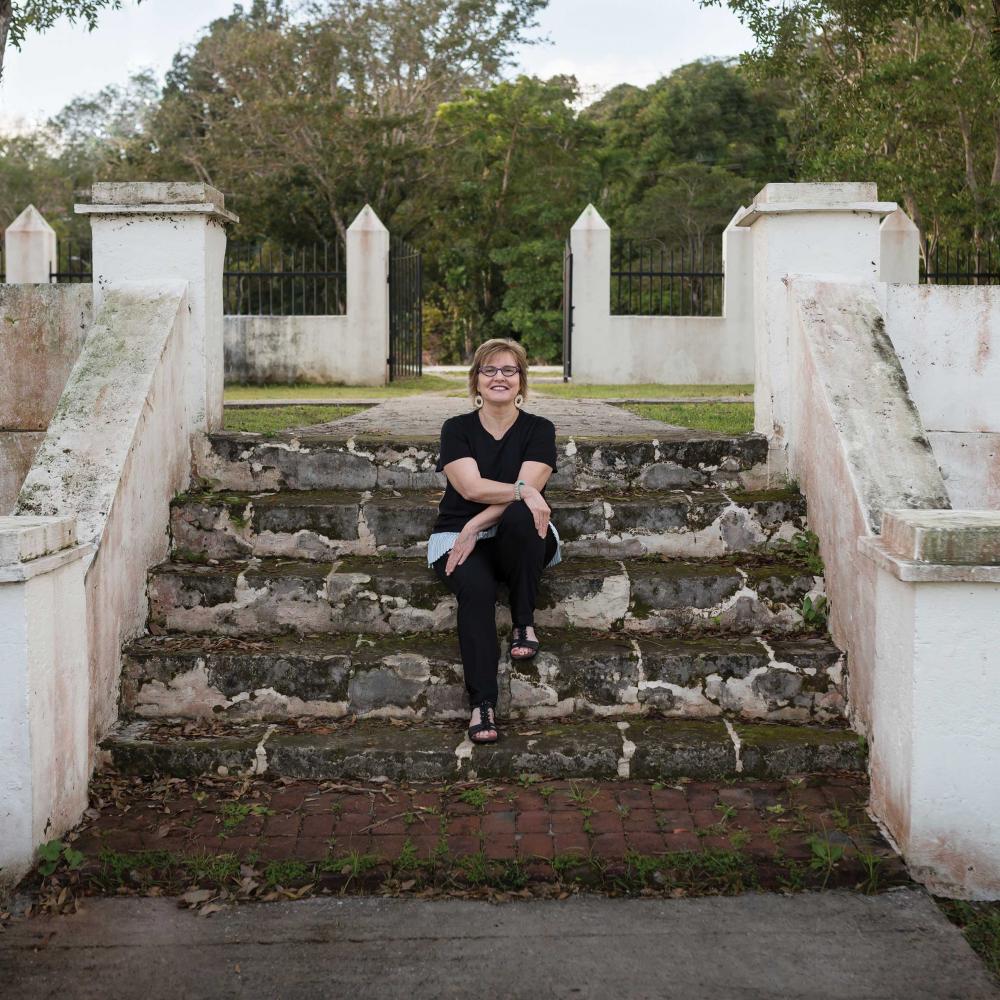 “People often have a very narrow perspective of Guam—‘Oh, it’s a military base’—but it’s so much more than that,” says Kimberlee Kihleng of the humanities council in Guam, which, after a rebranding campaign, now goes by Humanities Guåhan. “They think, ‘Oh, it’s just some island,’ but it’s very cosmopolitan in many ways and I don’t think people on the [United States] mainland understand that.”

Promoting a deeper understanding of Guam, a U.S. island territory in Micronesia in the western Pacific, has been a goal of Kihleng’s since she became executive director of Humanities Guåhan in 2005.

“The tagline we use is ‘Humanities make us,’” Kihleng says, underscoring how the humanities foster curiosity, discovery, engagement, imagination, and connections. “That’s something I chose because I think it encompasses how broadly the humanities can be viewed.”

The humanities, in Kihleng’s view, connect individuals to each other, as well as to their larger local communities, their respective states, and the international community.

Guam is a long way from the small farming town outside Chicago where Kihleng was born. She developed a fascination with Pacific Islands cultures, thanks both to an anthropology professor at the University of Arizona and to having lived with her parents in Guam, where her father ran the Government of Guam’s dental public health program. She then earned a master’s and a PhD in cultural anthropology from the University of Hawaii at Mānoa. Her research experience includes an ethnographic study of women and gender in the island of Pohnpei, Federated States of Micronesia, and an inventory of oral histories of the island nation of Palau, also located in Micronesia.

Kihleng’s career has included stints as a visiting professor of Micronesian studies at the University of Guam, the executive director of the Hawaiian Mission Houses Historic Site and Archives in Honolulu, and as the first historic preservation officer for the Federated States of Micronesia.

After years working in various parts of the Pacific region, Kihleng became intrigued by the chance to return to Guam, where she lived for many years, to delve into the public humanities.

“I worked in academia and did other things that were more applied, like museums, and when this opportunity in Guam came up . . . I was really keen,” she says.

Much like the island it calls home, Humanities Guåhan is small but aims to make an impact that belies its size.

“We have a small staff and there’s always a lot to do and never enough time to do everything, but we still, I think, present dynamic and innovative programs,” Kihleng says.

Those programs include “I Tano yan I Tasi”—which means “Land and Sea” in Guam’s indigenous Chamorro language—offering interpretive hikes, a film forum series, and a food democracy tour; “The Micronesian Question: Issues of Migration, Identity and Belonging on Guam,” exploring the lives and experiences of islanders from other parts of Micronesia who move to Guam; and “Democracy and the Informed Citizen,” featuring generative writing and immersive journalism workshops with Pulitzer Prize finalist Inara Verzemnieks.

The program “Democracy and the Informed Citizen,” Kihleng says, “gave the community a way to see journalism differently and to focus on place, community, and its relationship to the diverse history of Guam.”

Some may wonder what the word “Guåhan” in “Humanities Guåhan” means. Although the world has come to know the island as “Guam,” “Guåhan” is the indigenous Chamorro name for the island.

By using the name “Guåhan” rather than “Guam,” Kihleng aims to elevate the voice of the island’s indigenous people, even as she seeks to promote understanding and build ties throughout the island.

“The Chamorro people have such a rich history and culture that lives on and is still vital to our lifeway here, whether you’re Chamorro or not,” she says.

“I’m proud of our organization and how far we’ve come over the last 14 years,” she says. “We’ve contributed to the civic and cultural life of the island, and that’s fulfilling for me. I think I have one of the best jobs on Guam.”

Books that have made an impact on you? The novel The Mango’s Kiss by Albert Wendt, for the history and culture of the Pacific Islands region, specifically Samoa, from an indigenous perspective. Where We Once Belonged by Samoan Sia Figiel, because of the realities depicted of Pacific Islander lives and experiences, specifically those of women. The work of African-American women writers such as Maya Angelou, Toni Morrison, and Jesmyn Ward. Favorite historic site in Guam? Litekyan. There are ancient limestone forests and a Chamorro village site, where archaeological research has determined it to be one of the oldest indigenous sites in the Mariana Islands. Litekyan is also one of the most beautiful sites in Guam, with its expansive beaches, rich coral reefs, and stunning blue ocean. A typical day off? Walking on the beach at Tumon, Asan Beach Park, or Litekyan. Also, at home reading a favorite book.

Wayne Chargualaf is a journalist based in Guam. He writes business and lifestyle articles for Glimpses Media as well as freelance work.

The text of this article is available for unedited republication, free of charge, using the following credit : “Originally published as “Guam’s Kimberlee Kihleng Helps Elevate the Voices of the Island’s Chamorro People” in the Spring 2019 issue of Humanities magazine, a publication of the National Endowment for the Humanities.” Please notify us at @email if you are republishing it or have any questions.