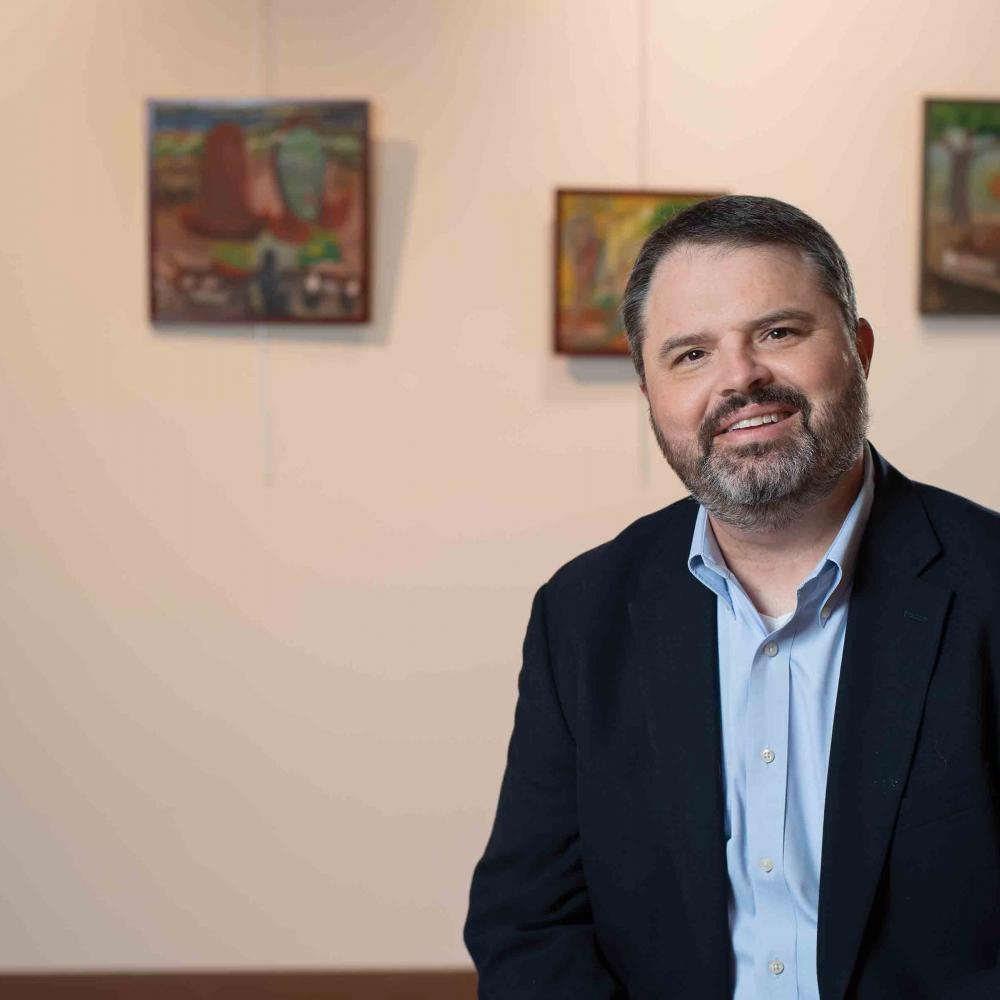 During challenging times, Brandon Johnson finds that the power of conversation can prevail.

“Once people start talking and listening to one another, within their own communities and with others in theirs, our democracy gets a lot stronger.” New Mexico is one of America’s great cultural crossroads, and so, to take full advantage of its diverse settings, there have to be interlocutors at the ready and in sufficient numbers.

That lively dynamic is what makes Johnson go. Getting to that juncture wouldn’t have necessarily happened if he hadn’t discovered in high school that history was his thing. After a third-place finish in National History Day with a project on William Tecumseh Sherman, graduate school began looming on the horizon.

By the time he arrived at the University of Chicago, his commitment to academic history was unwavering. Halfway through his doctorate, however, he discovered he didn’t want to be a professor. Instead, he wanted to bring history and the humanities to a much broader audience.

Doctorate in hand, he found a job in his home state of Utah. At the state’s humanities council he dived into grantmaking. Storytellers who are rarely heard from, he discovered, could find their voices there.

This revelation and evolving passion led ultimately to Johnson’s decision to hit the road again. Five years on, he traded the salt flats of Utah for the marbled corridors of the nation’s capital and the National Endowment for the Humanities, where “I could both expand my skills, and broaden my impact,” he says. “I was way out of my comfort zone, working with fundraising, with bricks and mortar, and with big and important projects on the line. I loved it.”

The West kept calling, however, as it does even to its most broad-minded and itinerant children, in this case accompanied by the distinctive twangs and melodies of New Mexico.

Johnson’s enthusiasm for the nation’s fourth-youngest state is palpable. “You cannot go anywhere in New Mexico without asking—what’s gone on here, what happened, and what happens next?”

Those questions and Johnson’s belief in the power of storytelling underlie almost everything the council does. Under Johnson’s leadership, the New Mexico council has become a front-runner in digital practices and platforms. This stance allows it to reach far beyond the usual Santa Fe/Albuquerque nexus and, during the last year, to provide ongoing benefits to a population ravaged by the pandemic.

“Our size is key for us,” Johnson says of his tiny staff of six, “it means we can be flexible, but we have to be very selective.” Putting resources into digital humanities is a way to extend the council’s reach, enhance its relevance, and fulfill its mission.

Programs that extend the council’s reach include Starting Conversations, a livestreamed video series in which “New Mexican scholars, storytellers, and tradition bearers” talk about everything from media literacy to poetry to climate change—all with an eye to broadening a shared sense of history and community. The Atlas of Historic New Mexico Maps is an online and fully interactive archive of the shifting spaces and peoples of the state. The podcast Augmented Humanity explores the intersections of the humanities and technology. A recent episode, “Going Medieval with Twitterstorians,” delved into the advantages of doing history on a social media platform, where academics may reach crossover audiences with tidbits from their work.

Johnson has recently championed the Manitos Community Memory Project, a virtual resolana (the sunny southern side of a building often used as a gathering spot). An Indo-Hispanic community centered in northern New Mexico and southern Colorado, the Manitos community has long been overlooked. Working with the council and New Mexico Highlands University, the community is fostering a platform for telling, capturing, and retelling stories central to its experience and identity, and to that of New Mexico.

And, of course, National History Day—the program that whetted Johnson’s appetite for history in the first place—is a bedrock. National finalists and medalists from New Mexico are the norm: young storytellers leading the way.

You’re a fly-fisher so you must have a favorite fly. Oh sure, the potentially boring, I mean really workaday, in every guidebook, but very effective in high-mountain streams, Humpy. On the Rio San Antonio near the Valles Caldera in the Jemez Mountains it works really well. Aside from telling stories, what else that we create, as human beings, do you love? I still remember—vividly—my first visit to an art museum. I just couldn’t believe we could make things like that. So, the visual arts. All of them.

Peter BG Shoemaker is a freelance writer formerly based in New Mexico.

This article is available for unedited republication, free of charge, using the following credit: “Originally published as “Executive Function with New Mexico’s Brandon Johnson” in the Winter 2021 issue of Humanities magazine, a publication of the National Endowment for the Humanities.” Please notify us at @email if you are republishing it or have any questions.